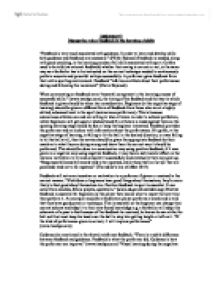 Assignment 2 Discuss the role of feedback in the learning of skills "Feedback is very much associated with guidance. In order to learn and develop skills both guidance and feedback are necessary." (PE for Edexcel) Feedback is needed, along with good coaching, in the learning process of all skills associated with sport. Golfers need to be told (via external feedback) whether their swing is correct or not, in the same way as a footballer has to be instructed on the correct technique needed to continuously perform accurate and powerful volleys successfully. A performer gains feedback from their entire sporting environment. Feedback "informs an athlete about their performance during and following the movement" (Claire Haycock) When commenting on feedback as an "essential component in the learning process of successful skills." (www.teachpe.com), the timing of the feedback and the way in which feedback is given should be taken into consideration. Beginners (at the cognitive stage of learning) should be given a different form of feedback from those who are at a highly skilled, advanced level in the sport (autonomous performers). This is because autonomous athletes can and are willing to take criticism in order to achieve perfection, whilst beginners will get upset or disheartened if a criticism is made against them as the opening learning stage should be fun or keep the beginner interested. ...read more.

(Claire Haycock) This is shown when the children will require or expect a demonstration by their PE teacher or coach before attempting the task or skill like a serve in tennis or badminton. Also, verbal guidance should be used in order to explain, describe and evaluate the skill. For example a coach could describe performing a low shot by saying 'keep your eye on the ball. Don't try to hit it too hard and as you strike it, make sure you don't lean back and keep your head and knee over the ball.' These two forms can be related to concurrent feedback which is "gathered during the performance of the skill" (PE for Edexcel). Another form of guidance is manual or mechanical guidance. This form of guidance "involves physically moving or restricting the performer." (PE for Edexcel) This form of guidance can either involve " physically manipulating the performer into the correct position so they gain the 'muscle memory', or kinaesthetic awareness of how the skill should feel." (PE for Edexcel) Examples of this could be moving a golfers feet so they are shoulder width apart and the knees are bent slightly, or performing the correct swing action with them so they grasp the concept of how it should feel. This method of guidance would work very well with the terminal method of feedback as the coach can see what's wrong after the performance and physically correct it. ...read more.

"The movement has been learned, and the performer has time to think about tactics, strategies, style, expression, and the fine tuning of skills." (www.felpress.co.uk/peglossary.htm) The performer can process the information quickly, because of experience the time between the input, processing and output (or decision) is very short. Example, a footballer can read the situation quicker, he can anticipate (from experience) when and where a through ball will be played so he can react and intercept it. "Not all performers reach the autonomous stage in all skills. For those who do, if practice isn't maintained, reversion to the associative stage will occur." (PE for Edexcel) Feedback is one of the most important factors in the whole learning process. The way feedback is given and the timing of it can have huge effects on beginners. It has less and less effect on moral of the participant as their skill level increases. This is because athletes are willing to take criticism in order to achieve perfection. I feel I have gained evidence from a variety of sources to suggest the cognitive stage needs high levels of positive external feedback in the reciprocal style of teaching in order to benefit the most, this way the performer/s doesn't become de-motivated and they still have the determination and hunger to proceed to the next level. "All methods of guidance and feedback has advantages and disadvantages depending on the skill and the learner. Often a combination of methods is the most beneficial and enables the skill to be developed efficiently" (PE for Edexcel) ...read more.