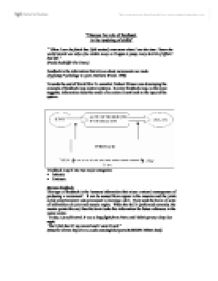 &quot;Discuss the role of feedback in the teaching of skills&quot;

"Discuss the role of feedback in the teaching of skills" " When I saw the finish line I felt excited, even more when I saw the time. I knew the world record was only a few strides away so I began to pump every last bit of effort I had left." (Paula Radcliffe-The Times) Feedback is the information that tells us about movements we made. (Applying Psychology to sport, Barbara Woods 1998) Towards the end of World War 2 a scientist, Norbert Wiener was developing the concepts of feedback-loop control systems. In every feedback-loop, as the name suggests, information about the result of an action is sent back to the input of the system. Feedback is split into two major categories: * Intrinsic * Extrinsic Intrinsic feedback This type of feedback is the 'sensory information that arises a natural consequence of producing a movement'. It can be sensed from organs in the muscles and the joints called proprioceptors and paramount in learning a skill. They send the brain all sorts of information on joint and muscle angles. ...read more.

For example, a sprinters action. Knowledge of Results (KR) The information consisting of the end results to determine whether an action is performed well. However, there can always be room for improvements, e.g. sprinters time at 100m. Types of feedback: * Concurrent: This is an ongoing source of instructions directed at the athlete whilst they are performing. It encourages the performer to change their technique whilst practising. This way the athlete can begin to feel the correct action and become more comfortable with it. * Terminal: This occurs after the action or performance, to allow the athlete what was right, wrong and improvements pointed out. * Delayed: Excellent after a strenuous match. This is giving the athlete time to think about their performance, feedback is given in time-"delayed". * Positive: Praising the athlete for their actions, hopefully repeating it in the future. * Negative: giving this type of feedback informs the athlete they are doing something wrong, following it should be constructive criticism for improvement to follow. ...read more.

yopur free leg, bend it and almost kicked as far back in the air to give you length" -Triple jump Visual "From the video I can see that the defence aren't working as a unit. The keeper has to be aware of this and tell the back four."-Football "Watch how I step into the shot and at the last split second flick my wrist,"- Badminton "Can you see how your arm doesn't follow all the way through?"-Javelin Delayed A day after a strenuous competition the team was taken through their mistakes.-Hockey "Well done today, get your things together and we will discuss it on Monday." -Squash "Go away and think about what you did wrong. We will talk about it next session." Positive "Fantastic! The centre passed it to the wing attack, and swivelled to the shooter, who scored!"-Netball centre pass. "Your doing great. Yes, a little higher....perfect"-Squash drive "Because you lifted your arms up did you see how you travelled further and higher?"-Long Jump. Negative "The ball wasn't passed via the bowler, that's why you went wrong!"-Rounders "Your volleying dramatically needs improving..that was awful." " ...read more.