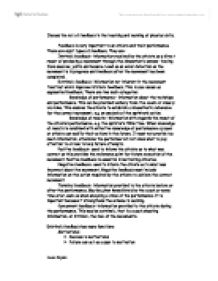 Discuss the roll of feedback in the teaching and learning of physical skills.

Discuss the roll of feedback in the teaching and learning of physical skills. Feedback is very important to an athlete and their performance. There are eight types of feedback. They are: Intrinsic feedback- information received by the athlete as a direct result of producing a movement through the kinaesthetic senses- feeling from muscles, joints and balance. Used as an error detection as the movement is in progress and feedback after the movement has been completed. Extrinsic feedback- information not inherent in the movement itself but which improves intrinsic feedback. This is also known as augmented feedback. There are two main categories: Knowledge of performance- information about the technique and performance. This can be provided verbally from the coach or visually via video. This enables the athlete to establish a kinaesthetic reference for the correct movement, e.g. an analysis of the sprinter's action. Knowledge of results- information with regards the result of the athlete's performance, e.g. the sprinter's 100m time. When knowledge of results is combined with effective knowledge of performance a player or athlete can modify their actions in the future. ...read more.

Reinforcing: > Behaviour that is rewarded tends to be repeated > Praise for a correct performance will act as positive reinforcement > Will influence the performer to desire to repeat the correct performance. Informational: > Feedback provides information about errors hence the performer will be able to correct errors > The learner is able to associate this information with other information, e.g. kinaesthetic feedback, so that they might be able to adjust future performances accordingly. Feedback occurs as a result of an action. A performer receives information during or after the performance of a skill, and can use this information to alter future performances. 'It allows us to compare our performance with the 'model' of the correct skill and thus to note errors and make adjustments. It tells us about the appropriateness or accuracy of the action so that we can monitor and adapt our behaviour as a result of precious performance' Barbara Woods, 1998 When giving feedback the coach should start by reinforcing the athlete for anything they have done correctly, no matter how small. ...read more.

Visual feedback for a beginner helps the performer to gain insight into a performance and its quality. Verbal feedback about performance can be very beneficial as long as it is clear and concise. Performers in the autonomous stage of learning benefit most from verbal feedback, as they are able to concentrate on what is being said, not needing to think about how to perform the basic skill. For example, during a netball match the coach may tell players what they need to do to play better and improve their game. As the netballer knows how to play they can focus on what the coach has said. Verbal feedback should be restricted during the early stages of learning since too much information can confuse the performer. Manual feedback involves physically moving or restricting the performer. This can either involve physically manipulating the performer into the correct position so they gain the 'muscle memory' or kinaesthetic awareness of how the skill should feel. For example, in tennis the coach may stand behind a beginner and guide them through a shot so that the performer would know the correct action. Laura Poyntz ...read more.