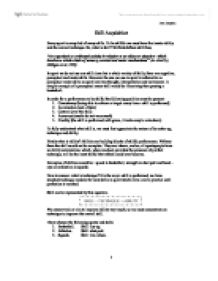 Skill Acquisition Every sport is compiled of many skills. To be skilful one must have the innate ability and the correct technique. So, what is skill? Welford defines skill thus, "An organised co-ordinated activity in relation to an object or situation which involves a whole chain of sensory, central and motor mechanisms" (as cited by; Gilligan et al, 1999) In sport we do not use one skill alone but a whole variety of skills; there are cognitive, perceptual and motor skills. However the one we use in sport is referred to as perceptual motor skills as sport involves thought, interpretation and movement. A simple example of a perceptual motor skill would be: Receiving then passing a basketball. In order for a performance to be skilful the following qualities must be present: 1. Consistency (being able to achieve a target every time a skill is performed) 2. An intention (not a fluke) 3. Control (over the skill) 4. Accuracy (results do not vary much) 5. Fluidity (the skill is performed with grace, it looks easy to onlookers) To fully understand what skill is, we must first appreciate the nature of its make-up; technique and ability. Firstly what is ability? Abilities are building blocks of skilful performance. Without them the skill would not be complete. They are inborn, and so, all sportspeople have an ability culmination; which, when reached, provided the presence of perfect technique, will be the most skilful that athlete could ever become. Examples of abilities would be: speed in basketball, strength in shot putt and hand - eye co-ordination in squash. ...read more.

4. Non throwing leg is relaxed and extended backwards, non -throwing arm is out in front of the body. 5. Drive non throwing leg towards body, (get ready position, before throw.) 6. Push and glide back toward medicine ball with non throwing foot. Duration: The drill should be repeated 20 times at the athletes pace. Points of Emphasis: 1. Low efficient leg extension - shot is pushed directly forward. 2. Focus only on the leg action and weight transfer across the circle. 3. Also the drill should be done without stopping. When to Use: Integrate into the entire technique as soon as possible. Possible Variations: half way through the glide the performer could freeze to analyse body position and height. Also, I would consider how far he is twisted backwards (away from the pit). 2nd Drill - Putting for Distance What This Drill Does: 1. Develop complete putting action 2. Develop explosive power in putting action Steps 1. Push shot from as far back behind body to as far forward as possible 2. Drive up onto toes and push forward with body 3. Release shot so that arms are fully extended in front of body and above head Points of Emphasis: 1. Use of the whole body in this action, not just the arms. 2. Complete arm extension. 3. Weight behind body. When to Use: Once technique work begins 3rd Drill - Putting for Height and Distance What This Drill Does: 1. Develops complete putting action. 2. Develops explosive power in putting action. Steps 1. ...read more.

This is true because team sports are "Open", and variable practice suits this type of activity best. Massed practice is used over distributed practice because the elite performer would have to be pushed to their limits (overload) in order for any improvement to take place (making the practice beneficial). They would not require extrinsic feedback as they would know what they are doing right and wrong. Racket games can be elucidated as open, co-active and externally paced. The best practice is one which is variable and massed because in most racket games many skills require a high performance level; these skills can only be achieved and later "polished off" by constant practice, which, should be continuously changing the response required of the player. Thus, testing the player's decision making ability and in-game proficiency. Furthermore, if a novice racket player is considered, they would require a different approach to practice. Variable practice would be used as racket sports are "Open". Distributed practice would be used instead of massed practice because the player is of low level and would not be able to sustain a required level of performance throughout the practice due to a lack of fitness and motivation. For the three types of activities above one must consider the factors which affect performance; the first is motivation, positive motivation is required over negative, this can be generated intrinsically (one thinking they did well) or extrinsically trainer giving a pat on the back). The second factor to consider is reinforcement: which can be social (from your trainer), material (medals and tangible rewards) and internal (from within); good reinforcement will fuel the participant's desire to perform and improve. Furthermore, in order to maintain performance, anxiety must be controlled. ...read more.