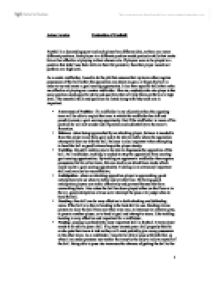 Adam Lawton Evaluation of Football Football is a demanding sport and each player has different jobs, as there are many different positions. Each player in a different position needs particular skills that make him or her effective at playing in their chosen role. If players were to be played in a position that didn't use their skills to their full potential, then that player would not perform at a high level. As a centre midfielder, I need to do the job that ensures that my team either regains possession of the ball before the opposition can shoot on goal, or keeps the ball in order to try and create a goal-scoring opportunity. I also have specific skills that make me effective at playing as a centre midfielder. Like me, anybody who else plays in the same position needs specific skills and qualities that will help them perform at a high level. The essential skills and qualities are listed along with why each one is important. * Awareness of Position- if a midfielder is out of position then the opposing team will be able to exploit that area in which the midfielder has left and possibly create a goal-scoring opportunity. But if the midfielder is aware of his position he will not wander out of position and add stability to the team's formation. * Balance- when being approached by an attacking player, balance is needed to force the player away from goal and to be able to tackle when the opposition attempts to beat me with the ball. Balance is also important when attempting to head the ball as good balance keeps the player steady. * Tackling- this skill enables you to be able to dispossess the opposition of the ball. As a midfielder, tackling is needed to stop the opposition from creating goal-scoring opportunities. By tackling an opponent a midfielder then regains possession for his or her team, this can lead to an attack been made which could lead to a goal scoring opportunity. ...read more.

My kicking foot makes clean contact through the "mid-line" of the ball in order to increase both power and accuracy. My non kicking foot is placed at the side of the ball allowing me to stabilise my body position and to make a support for body which then allows a cleaner contact with the ball. The technique I use resembles that of the "model" technique (Reference Sheet 2). This allows me to be confident when passing over a longer distance as I know I am doing everything correctly. As I am more confident knowing that I am performing the skill correctly this causes the number of errors I make to decrease. As a midfielder, heading is a part of my game that I must be competent with. I feel that this is 1 of my main strengths. I believe that I win a larger percent of headers in midfield i.e. from set pieces or from open play. Also I feel that when heading for goal my heading is accurate and a sufficient amount of power is generated in order to trouble the goal keeper. Courage and Bravery come a lot into heading. If a player is scared of heading the ball then they will simply not attempt to head the ball. Bravery is also needed when you have the risk of clashing heads with an opposing player. I feel that when I attempt to head the ball I am confident and brave and that the result will see me winning the header. When heading I feel that I follow the "model" for heading (Reference Sheet 3). I believe that I keep my eyes on the ball until I have headed the ball. Also I feel that I follow the "model" when it comes to heading the ball. This shows that the back should be arched which helps as a lever bringing the head forward to strike the ball with force and power. ...read more.

Strategies and Tactics I feel that my main weakness is when I become over aggressive due to the fact of my competitiveness. I believe that when I become over aggressive the accuracy and performance in all the different parts of my game decrease. Becoming over aggressive also leads me to be more likely to argue with officials which may result in me receiving a caution. Sometimes I feel my decision making is not the best. I sometimes hold on the ball for too long which can lead to me losing possession for my team. This is linked to my awareness. I feel that this also needs to be improved. My poor awareness can lead to me rushing when in fact I have more time to think about the decision. When players of a high standard are in trouble or are unaware of their surroundings they simply look around. I feel that learning to raise my head more may be the solution to my lack of awareness. Fitness Although I believe my fitness levels to be a high I feel that I am not as flexible as I should be. As I am not as flexible as other players I will use up more energy also I am more likely of getting injured as my joints are less flexible. I tend to often pull or twinge my quadriceps which may be prevented by improving my flexibility. Also I feel that my speed is not as good as it should be. I often find that I am unable to beat the last defender as I do not posses enough speed. This needs to be improved as I need to be able to beat players to the ball, especially in midfield as this is where the game is won or lost. As well as speed I feel that my reaction time is not as good as it should be. This may lead me been bypassed by the ball. All of these fitness weaknesses are essential for a midfielder and I see them as an area which needs to be improved. ?? ?? ?? ?? 1 ...read more.