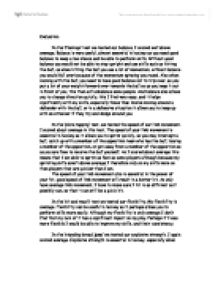 Evaluation of the 'flamingo' (balance) test

Evaluation In the 'flamingo' test we tested our balance. I scored well above average. Balance is very useful, almost essential in hockey as you need good balance to keep a low stance and be able to perform skills. Without good balance you would not be able to stay upright and use skills such as hitting the ball, as when hitting the ball you use a lot of momentum, without balance you would fall over because of the momentum spinning you round. Also when running with the ball, you need to have good balance not to trip over, as you put a lot of your weight forward over towards the ball so as you keep it out in front of you, this then will unbalance some people. And balance also allows you to change direction quickly, this I find very easy, and it helps significantly with my skills, especially those than involve moving around a defender with the ball, or in a defensive situation it allows you to keep up with an attacker if they try and dodge around you. In the 'plate tapping' test, we tested the speed of our limb movement. ...read more.

As I have good core strength I find keeping a naturally low position very easy, and it helps my ability to play significantly. To test our functional strength we did a bent arm hang. I scored above average in this. Functional strength can be useful in hockey when keeping a low position as you have to keep your leg muscles in the same low position for a length of time. I find keeping this position easy, and although having good functional strength may not be the main reason why, as although you have to keep a low posistion you don't have to keep for a prolonged amount of time at once. And as the bent arm hang was testing the functional strength in your arms, I would think that this is irrelevant to hockey as you don't have to keep your arms in such a posistion during hockey. We did an 'alternate hand wall toss', which tested our hand/eye coordination. I scored above average in this. Hand/eye coordination is essential in hockey; it plays a big part in receiving passes and making them. As I have a good hand/eye coordination making and receiving passes is one of my strengths. ...read more.

The plate tapping test, which tested the speed of limb movement, is not what I would have expected. I scored just about average but I would have expected to score above that as I have a stronger hit than most of the team and I can outrun most people during a game. I think that the reason for having a strong hit may just be becasuse my hand-eye coordination is above average, and that I can outrun people because I have good caridovascualr fitness and so I may not be as tired as most people and so therefore can outrun them. In conclusion I think that I need to improve my running speed/agility. I scored below average in this and there are aspects of my game that reflect this. Better speed and agility would improve both my defensive and offensive skills as I would be able to keep up with an attacker and mark them, and also if I was that attacker I would be able to dodge the defender as I would be able to change direction at speed quickly. To improve my running speed and agility I also think it is important to improve my cardiovacualr fitness. ...read more.