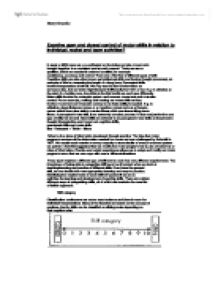 Examine open and closed control of motor skills in relation to individual, racket and team activities?

Examine open and closed control of motor skills in relation to individual, racket and team activities? In sport a skill is seen as a co-ordinated act involving complex movements brought together in a consistent and smooth manner. There are some qualities, which are needed in order to be skilful, for example consistency, accuracy and control. There are a Number of different types of skill. Cognitive skills are also often known as intellectual skills and involve thought processes; an example of this is measuring the length of a long jump. Perceptual skills involve interpretation of stimuli. We may see the same information as someone else, but our brain might interpret it differently from him or her. E g. In athletics at the start of a hurdles race, the stride to the first hurdle we each see differently. Motor skills involve the muscular system and concern movement and muscular control. For an example, walking and running are motor skills as they involve movement and muscular control, to run fasts ability is needed. E.g. In athletics a long distances runner or a marathon runner such as a Kenyan runner which have slow twitch muscles fibres which are slower-firing nerve fibres. A perceptual motor skill, is an extremely complex process. It does not just involve one type of skill, but several. ...read more.

Closed are those that have no out-side physical influences acting upon them. They are the same each time they are performed. The performer will go through 'a pre-learned sequence of motor activities' with no reference to the environment in which the skill is being performed. E.g. In athletics a sprinter which uses fast twitch and slow twitch muscles is a closed skill. Specific abilities required in sport include hand eye co-ordination, flexibility, speed etc. For an example of speed is a long distance run and sprinting, an example of hand eye co-ordination is a tennis serve. Without these abilities, it would not be possible to learn skills. You would find it hard to be able to do the sprint start without being taught what to do, so you would have to learn what to do. You will have to be taught how to get into the position to start. Speed is ability that can be coached by practise and training will also enhance basic ability. "An organised co-ordinated activity in relation to an object or situation which involves a whole chain of sensory, central and motor mechanisms" this was said by Welford. A term associated with skill and ability is technique. ...read more.

is made of different movements that have to be controlled and preformed in that way at the correct time. The smash in tennis uses a number of executive programmes. The way we perform a certain skill is stored in our motor memory and then accessed whenever we want to perform. Once a decision has been made to produce a movement the brain has to decide how to control the muscles needed to execute the action. Some movements that we perform quickly, especially in closed situations seem to happen automatically. The brain sends all the necessary information in one chunk to the muscles that need to move. This is known as Open Loop Control. Feedback is available to the performer but not used to control the action. E g. Sprint race start with a gun . This theory explains how we can control and perform fast movements but doesn't explain how we are able to change and reposition ourselves during some movements. Closed Loop Control - A decision to move is made in the motor control centre (brain). Some of the information is sent to the effector organs (muscles). The rest is sent during the action and feedback monitors the effectiveness of the movement. Because of the feedback changes can be made during the movement. . Henry Kruczko ...read more.