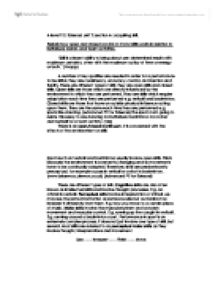 Explain how open and closed control of motor skills works in relation to individual, racket, and team activities.

A level P.E. Edexcel, unit 2: section A: acquiring skill. Explain how open and closed control of motor skills works in relation to individual, racket, and team activities. 'Skill is a learnt ability to bring about pre-determined results with maximum certainty, often with the maximum outlay of time or energy or both.' (Knapp) A number of key qualities are needed in order for a performance to be skilful, they are consistency, accuracy, control, an intention and fluidity. There are different types of skill, they are open skills and closed skills. Open skills are those which are directly influenced by the environment in which they are performed. They are skills which require adaptation each time they are performed e.g. netball and badminton. Closed skills are those that have an outside physical influence acting upon them. They are the same each time they are preformed e.g. sports like dancing. (Advanced PE for Edexcel) The sports I am going to relate this essay to are dancing for individual, badminton for racket and netball for a team activity. (146) There is an open/closed continuum, it is concerned with the effects of the environment on skill. Sports such as Netball and badminton usually involve open skills. ...read more.

do a new shot or the correct way to do a shot in badminton, it would also be good to teach a group of people the correct way to pass the ball or how to do a specific skill correct in netball. This would be good for open and closed skills. Reciprocal teaching is when the pupils work in pairs, one is the 'doer' and the other is the 'observer' the teacher gives instructions and hands over the contact with the learner to the fellow pupils, the teacher helps the observer to help the doer. This would be a good style of teaching to improve the movements and style in dancing, make shots more consistent and accurate in badminton, to make passes more accurate and to improve footwork in netball. This would be good for closed skills. There is a problem solving style, this is where the teacher focuses on how - to learn, a task is set which the pupils have to solve in there own way. (Physical education and the study of sport) Individual skills are those performed in isolation. These are skills where we are the only performer at the particular time e.g. ...read more.

The performer will work constantly allowing the skill to be tested under fatigue conditions as in a game situation. This would be good in practicing dance because you can be dancing for long periods of time so stamina is essential. In badminton and netball, games can be long and physical, so it is important to get used to playing under fatigue conditions. (Advanced PE for Edexcel) In summery I think that dance is a mainly closed skill because it is a coactive/individual skill and not often affected by the environment, badminton is in the middle of the open/closed continuum because it is affected by the opponent(s) but not by the weather and netball is a mainly open skill because it is affected by opponents and possibly the weather but it is a non-contact game. Taking in account that not all individual, racket and team activities have the same rating on the open/closed continuum or the same level of motor skill. Badminton, dance and netball are all motor skills and perceptual motor skills. It would suit most teaching styles and types of practice depending on what you want to achieve, e.g. if you are a young beginner or professional. In final conclusion I think that you cannot group activities as individual, racket and team activities when relation it to open/closed control of motor skills because there is too much variation in the groups. ...read more.