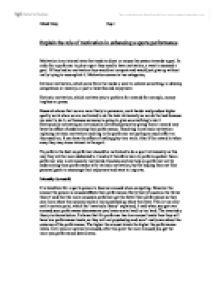 Explain the role of motivation in enhancing a sports performance Motivation is an internal state that tends to direct or arouse the system towards a goal. In order for a performer to play a sport they need to have motivation, a want to succeed a goal. If they had no motivation they would not compete and would just give up without really trying to accomplish it. Motivation comes in two categories, Intrinsic motivation, which come from the inside a want to achieve something, to develop competence or mastery, or just to have fun and enjoyment. Extrinsic motivation, which motivate you to perform for rewards for example, money trophies or praise. Research shows that we are more likely to persevere, work harder and produce higher quality work when we are motivated to do the task intrinsically as we do the task because we want to do it, not because someone is going to give us something to do it. Extrinsically motivating an intrinsically motivated person by giving them a reward may have the effect of undermining their performance. Resulting in extrinsic motivation replacing intrinsic motivation resulting in the performer not putting as much effort as they used too. It can have the effect of making play into work. ...read more.

Performer A is a beginner and has less confidence in their abilities wont perform as well under large arousal levels which may cause them to make mistakes and get worried. The drive theory also alters between different sports as sports that require precise controlled movements or complex skills like golf or shooting would have an optimum arousal level much lower than Sports that require a lot of power and adrenaline like weight lifting or the long jump. So the more aroused you are the more motivated you are so the better your performance up to your optimal arousal levels, which alter between different sports and different performers. Each individual performer has different levels of motivation depending on their personality. There are two main types - Needs to achieve personality (NACH) these personalities thrive on challenges and a need to achieve a task. Performers such as game players, climbers fall in this category. - Need to avoid failure personality (NAF) these people try to avoid anything new as they have a fear of failure it is less common to see this type of personality in sports, as they hate to fail. ...read more.

Elite performers who get to a stage where they are unable to improve still need goals to maintain their current performance and maintain their high level of motivation. Self confidence Performers will be more motivated to participate in activities, which they have high self-confidence in. The amount of self-confidence we have in a particular task effects the amount of effort and persistence they put in. There are four factors that effect performers' sporting self-confidence. - How an performer has performed in the past - If an performer has seen a task completed successfully, - Verbal persuasion - Ability to control arousal levels Coaches can improve performance by making a performer more confident. They can do this by giving performers experience, e.g. letting them play matches not just practicing closed skills. Showing a performer the correct technique for a skill and Verbally encouraging them. Motivation will enhance performance by making a performer more aroused to perform a task, which will make them perform the task better and for longer periods. The type of motivation intrinsic or extrinsic effects how the performer perceives the task making them perform accordingly. Also people with different personalities NACH/NAF will perform differently with different levels of motivation. You can increase motivation by setting achievable goals, which can increase self-confidence, which can increase motivation making them perform better. ...read more.