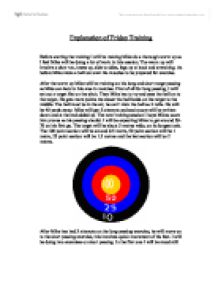 Explanation of Friday Training Before starting the training I will be making Mike do a thorough warm up as I feel Mike will be doing a lot of work in this session. The warm up will involve a slow run, knees up, side to sides, legs up at back and stretching. As before Mike kicks a ball we want his muscles to be prepared for exercise. After the warm up Mike will be training on his long and short range passing as Mike can lack in this area in matches. First of all for long passing, I will set out a target flat on the pitch. Then Mike has to try and pass the ball on to the target. He gets more points the closer the ball lands on the target to the middle. The ball must be in the air, he can't kick the ball so it rolls. He will be 40 yards away. ...read more.

This will get Mike shaper when passing the ball and receiving the ball, also improving his passing technique. After the passing exercises there Mike will be doing my dribbling exercises. This will only be for 30 minutes as there isn't much Mike can do, without repeating the exercise. Mike will start with the ball and I will stand off him while he runs at me using lots of skills and speed to get around me. I wont put a challenge in I will just back off. This will improve Mikes dribbling skills and also encourage him to take on players more in game situations. I will only do this 3 times with Mike as it's not very interesting. After this I will place 10 cones 1 metre apart and Mike has to dribble in between each cone using both feet, and once he gets to the end of the cones I want him to run at the goal keep and either shoot past him or try and dribble past him using tricks. ...read more.

The third exercise is where Mike passes the ball to me and I lay it back to his right or left and he has to shoot, but there will not be a goal keeper in, instead I will run tape across the goal like shown below. Once I have passed the ball back to Mike he has to shoot into the part of the net I say, for example I can lay it off to his left and tell him to shoot in section 2, and this means he has to shoot low and in the right hand corner. Mike will have to get his shots accurate if he is to succeed in my training. Mike will have 10 attempts on this and I will count the amount he gets in the designated areas and I will see if he improves through out the six week training programme. This will be Mike Friday training session almost complete, as he has to do a warm down this will get his heart rate back to normal and remove any lactic acid still in his muscles. ...read more.