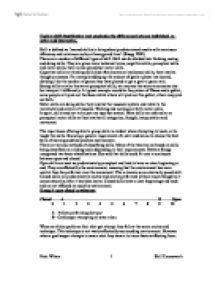 Explore skill classification and emphasize the differences between individual, co-active and interactive.

Explore skill classification and emphasize the differences between individual, co-active and interactive. Skill is defined as 'learned ability to bring about predetermined results with maximum efficiency and minimum outlay of energy and time' (Knapp 2000). There are a number of different types of skill. Skill can be divided into thinking, seeing and doing skills. They are given more technical terms; cognitive skills, perceptual skills and motor skills, there is also perceptual motor skills. Cognitive skills are thinking skills and often known as intellectual skills, they involve thought processes. For example adding up the amount of goals a player has scored, dividing it by the number of games they have played to get a goal to game ratio. Seeing skills are also known as perceptual skills, we may see the same as someone else but interpret it differently. A typical example would be the picture of 2faces and a goblet, some people will pick out the faces whilst others will pick out the goblet, others may pick out both. Motor skills are doing skills; they involve the muscular system and relate to the movement and control of muscles. Walking and running are both motor skills. ...read more.

The learner applies the skill to a number of environments in practice, allowing both the development of the skill and the ability to adapt the skill to a range of possible situations. Variable practice is vital for open and interactive skills. Fixed practice is the other form of practice; a specific movement is practiced repeatedly. This type of practice is designed for skills that are always performed the same way no matter what the environment. Closed and coactive skills tend to be practiced with fixed practice as they will stay the same in practice as in competition. Fixed practice can also be used to learn interactive skills before they are put into situations. Skills and the level they can be performed at can also affect the organisation of a practice session. Practice can be 'massed' where a skill is practiced until learnt without a break, or 'distributed' where the practice is interspersed with breaks of either rest or another skill. Massed practice is aimed at athletes with high fitness and experience whereas distributed practice is aimed at lower level participants. It is being able to classify skills which enables use to determine the type of practice needed and therefore the development of our skills. 1,186 words Peter Wilson 1 Skill Coursework ...read more.