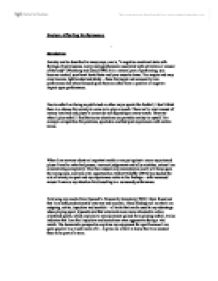 Factors Affecting Performance Introduction: Anxiety can be described in many ways, one is, "a negative emotional state with feelings of nervousness, worry and apprehension associated with activation or arousal of the body" (Weinberg and Gould 1995) It is a natural part of performing, you become excited, your heart beats faster and your muscles tense. You respire and may even become light headed and shaky - these feeling do not necessarily ruin performance but when focused upon they can either have a positive or negative impact upon performance. Due to netball not being as publicised as other major sports like football, I don't think there is a chance for anxiety to come in to play as much. There isn't a vast amount of money involved and player's careers do not depend upon every match. However when I play netball I find that some situations can provoke anxiety in myself. For example competition for positions, spectators and bad past experiences with certain teams. When I am nervous about an important match or am put against a more experienced player I tend to make bad passes, incorrect judgements and silly mistakes, unless I am concentrating completely. ...read more.

Elite performers can cope with high levels of arousal before their performance deteriorates. This links with Hull's drive theory but in need more experience and practice before I reach that level. diagram McGrath (1974) looked at the multidimensional approach which detailed the tolerance limit of ones daily function and that stimulation might be perceived as pain at extreme levels. He also concluded that what one person might find stressful would be challenging and exciting to another. I often find that I will look upon an important match as exciting whereas others will find it daunting and scary. Although I do find that when I get negative feedback from teammates my anxiety levels rise quickly, this leads to distress where I become unfocused and frustrated. Factors such as seeing my team winning and positive feedback from my coach help me to reach my optimum arousal resulting in a more dominant response. This dominant response is dictated by experience and practice and Cattrell (68) calls the worry that people have when they are being observed "evaluation apprehension". This phenomena is called 'drive theory' by Zajonk who focused on how performance changes when people are put in front of an audience. ...read more.

My experiment: I chose to focus upon 'performance goals' in my experiment and came to the conclusion that due to my position as centre in netball it would be based upon centre passes. My goal will be to make at least 10 successful centre passes in my next game. First of all I must play a game to compare to my game with the set goals. Conclusion: From looking at my results I can see that it was beneficial to my performance to have set goals. It helped to take my mind off the anxiety that builds up, however I did feel that because I was so focused upon this one part of my game I started neglect other parts. I think I would rectify this by setting more goals for other parts of my game. I will also have to be careful in future not to set unrealistic goals as it may knock my confidence. It is important that you recognise that you are responsible for your own anxiety levels. Very often they are a product of the way that you think. Learn to monitor your anxiety levels and adjust them if you need more or less. ...read more.