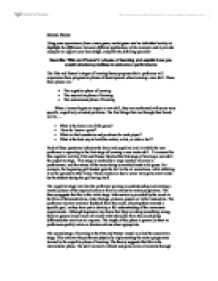 `Fitts and Posner's` phases of learning.

Gemma Brayne Using your experiences from a team game, racket game and an individual activity to highlight the differences between different applications of the concepts and to provide examples to support your knowledge, complete the following question: Describe `Fitts and Posner's` phases of learning and explain how you would structure practises to enhance a performance The Fitts and Posner's stages of learning theory proposes that a performer will experience three progressive phases of development when learning a new skill. These three phases are:- * The cognitive phase of learning * The associative phase of learning * The autonomous phase of learning When a learner begins to acquire a new skill, they are confronted with some very specific, cognitively oriented problems. The first things that run through their heads will be.... * What is the basic aim of this game? * How do I score a point? * What are the boundaries and positions for each player? * What is the best way to hold the racket, or bat, or club or ball? Each of these questions indicates the basic and cognitive level at which the new performer is operating in the first stage of learning a new motor skill. ...read more.

As kinaesthetic awareness of the movement develops, the performer is able to provide internal feedback as they have developed an ability to detect some of their own errors in performing the task to supplement any external information. The timescale before progressing to the autonomous stage of learning may vary depending on the level of ability, complexity of the task, type of practice and quality of feedback. At this stage variability of performance from one attempt to another also begins to decrease. After much practice and experience with the skill, the learner moves into the final stage of learning, the autonomous stage. In the autonomous stage the performer demonstrates the ability to complete skilled actions with increased efficiency, accuracy and speed involving little conscious control. The theory suggests this is the final stage of learning. The information processing time is reduced and distractions have less effect on performance. Highly skilled golfers concentrate on the ball and some of the specific adjustments that they must make in their normal swing to produce a particular shot. Highly skilled dancers do not think about the individual steps of the routine, for they have become automatic. ...read more.

Once the coach has figured out what phase the performer is at then he/she needs to think about what type of practices they are going to use. If the learner is at the cognitive stage then the game must be explained to start of with and then the different motor skills must be broken down into small parts. The learner will need a lot of visual or manual guidance to begin with. For example- Basketball The coach could chose from different method including whole method, whole-part-whole method, Part method or progressive part method. I would choose the Progressive part method; I would explain the simple rules and of the sport to the performer then break down the different motor skills involved in the sport. Each skill is broken down into sub-routines, which are practised in isolation and well learnt. Part one is learned then part two are joined together; part three is then learned in isolation and then added top parts one and two. This is particularly effective for learning how to do a lay up. This is a very good method because the weaknesses can be targeted more easily, practised and improved. ...read more.