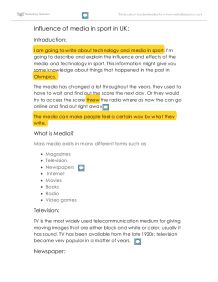 I am going to write about technology and media in sport. Im going to describe and explain the influence and effects of the media and technology in sport.

Influence of media in sport in UK: Introduction: I am going to write about technology and media in sport. I'm going to describe and explain the influence and effects of the media and technology in sport. This information might give you some knowledge about things that happened in the past in Olympics. The media has changed a lot throughout the years, they used to have to wait and find out the score the next day. Or they would try to access the score threw the radio where as now the can go online and find out right away. The media can make people feel a certain way by what they write. What is Media? Mass media exists in many different forms such as: * Magazines * Television * Newspapers * Internet * Movies * Books * Radio * Video games Television: TV is the most widely used telecommunication medium for giving moving images that are either black and white or color, usually it has sound. ...read more.

With the help of media many people can get sponsorship that they might not have got without the media, as sponsors would not have got to see the athlete without the television, newspaper, internet, magazines or heard on the radio. Disasters which happened in football: * The Hillsborough Disaster was a human crush that occurred on 15 April 1989 at Hillsborough, a football stadium, the home of Sheffield Wednesday F.C. in Sheffield, England, resulting in the deaths of 96 people, all fans of Liverpool F.C. It remains the deadliest stadium-related disaster in British history and one of the worst ever international football accidents. * The Heysel Stadium disaster occurred on 29 May 1985 when a masonry wall failed then collapsed under the pressure of escaping fans in the Heysel Stadium in Brussels, as a result of rioting before the start of the 1985 European Cup Final between England and Italy. 39 people died, 32 of the Italy fans, and 600 were injured. ...read more.

Video camera technology: This is also good point about technology in sport. There is many situations in sport like for example; referee decided to give a penalty shot in football or decided that there was an off side, but sometimes referees decided wrong. That is way video camera technology should be used, so that the penalty is fairly given to the team. Drug testing: Drug doping is still a big problem in sports in every sport for all ages. Hundreds of athletes take drugs to improve their performance all the time to increase their stamina, power. Doping used to be allowed in sport, but with time technology was becoming better, and people started to Suggesting that drug doping was cheating. Currently doping is illegal in any ways and all athlete's have to do all kind of test before any tournament or world cups, but some people use drugs that can't be seen in the drug tests, but there is special scientist that are working to find ways in catching everyone who has an unfair advantage over everyone. ...read more.

This assignment is factual but lacks in application and examples throughout.

Acknowledging sources of information in the bibliography below is good.