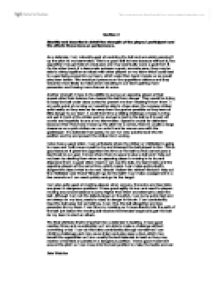 Identify and describe in detail the strength of the player/ participant and the effects these have on performance.

Section 2 Identify and describe in detail the strength of the player/ participant and the effects these have on performance. As a defender, I am naturally good at receiving the ball and accurately passing it up the pitch to my teammates. This is a good skill to have because without it, the opposition may get hold of a bad pass and may eventually score a goal from it. On the other hand, if a teammate recieves a good, accurate pass, they may be able to string together an attack with other players on my team which could lead to a goal being scored for our team, which could then boost morale so we would play even better. This would put pressure on the oppositions defence and they would be more likely to make errors resulting in our team gaining more possession and having more chances to score. ...read more.

If a defender has speed, he can run very quickly back into his position and try and prevent the striker from scoring. I also have a good vision. I can anticipate where the striker or midfielder is going to move and I will move myself to try and intercept the ball played to him. This is good because it gives the oppostion less time on the ball so they cannot pose a big threat to our goal. I know where there is space to play a ball and I help out my team by alerting them when an opposing player is moving in to try and disposess them. A good vision means I can see the ball, my teammates and the opposing players at the same time, which means I can make quick priority judgements about what to do next. ...read more.

I have good reaction times and co-ordination so I am able to make a challenge without commiting a foul. I can do this fairly consistently athough sometimes I can mistime challenges and may cause injury and give away a foul, which may benefit the oppostition as I am usually the last defender to beat so they may receive a free-kick or penalty in a dangerous position. I have good movement around the pitch so I can move into the best position to make the tackle and can make it look like the challenge was easy to enact. I always appear to be running up and down the pitch without actually contributing to the game but I do because I alert players about incoming tackles and passes. I also tackle when I go up into the opponent's box to try and get posession for my team so they can try and shoot and score. Jake Webster ...read more.