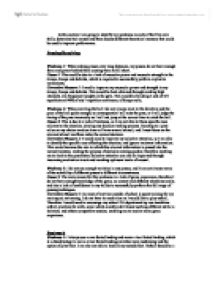 Identify my weakness in each of the five core skills, determine heir causes and then discuss different theoretical measure that could be used to improve performance.

In this section I am going to identify my weakness in each of the five core skills, determine heir causes and then discuss different theoretical measure that could be used to improve performance. Passing/Receiving Weakness 1: When making passes over long distances, my passes do not have enough force and power behind them causing them to fall short. Cause 1: This could be due to a lack of muscular power and muscular strength in the triceps, biceps and deltoids, which is required to successfully perform explosive movements. Corrective Measure 1: I need to improve my muscular power and strength in my triceps, biceps and deltoids. This would be best achieved through working high intensity, low frequency weights in the gym. This would be by doing 4 sets of 5/6 repetitions at 90% of my 1 repetition maximum, of biceps curls, Weakness 2: When receiving the ball I do not always react to the direction and the pace of the ball quick enough, so consequently I will miss the pass, or I will judge the timing of the pass incorrectly so I will not jump at the correct time to catch the ball. Cause 2: This is due to a lack of alertness, so I am not able to focus specific cues relevant to the situation, slowing my decision-making process. Reacting to a pass relies on my choice reaction time as I have several stimuli, and I must focus on the relevant stimuli and then make the correct decision. ...read more.

Standing 3 metres away from three hoops, I would have to throw the quoits/beanbags and aim to get them into the hoops. To increase difficulty when hand eye coordination improves, I could make the hoops smaller so I have a smaller target to aim for, or I could replace the hoops with cones. My aim would then be to get as many quoits as possible on the cones. To make these practices more specific to shooting in netball, I would need to do massed practice of shooting fro different parts of the 'D'. During this practice, I would need to receive a lot of extrinsic feedback from my coach, in the form of both knowledge of performance and knowledge of results. This would enable me to develop my skills, and would be particularly beneficial as I am I the autonomous stage of learning. Weakness 2: I am not very confident as I shooter. When under pressure during a game I panic and rush my shots. Cause 2: This is due to me being over aroused. My arousal levels increase under pressure, but they do not increase to a level, which enhances my performance. Instead they reach a level that is too causing me to become anxious, therefore hindering my performance (inverted 'U' theory). Increased levels of arousal also cause perceptual narrowing, which decreases my ability to be able to focus and concentrate. Corrective Measure 2: There are several ways to help decrease my arousal levels to a level that would enhance my performance: * ...read more.

This type of training works both the aerobic and anaerobic systems, with the intensity of the training varying from low intensity walking to high intensity sprinting. During this type of training, the body must quickly adapt to different intensities of work, and recover from different stresses as it would during a netball match. Weakness 3: I lack in clear verbal communication on court. Cause 3: This could be owing to my personality. I am not a very outgoing person, and would probably be classed as and introvert rather than an extrovert. I favour individual sports and have more experience performing as an individual rather than in a team, which could affect my behaviour and communication skills on a court. I also feel that owing to my personality, I am not particularly confident and I have a low self-esteem and self-efficacy. My verbal communication may be lack due to the fact that I do not believe in my ability, therefore am reluctant to play a major role in the game. Corrective Measure 3: It is not really possible to completely alter my personality, however there are aspects of my personality that can be changed slightly. It is important that I understand how my personality traits have an effect on my performance, so I can develop the aspects of my personality that could be a disadvantage to me. My confidence could be improved through my coach doing confidence building exercise with me. When practicing skills I would need to be given a lot of positive reinforcement and positive encouragement, which would increase the faith, I have in my abilities. ...read more.