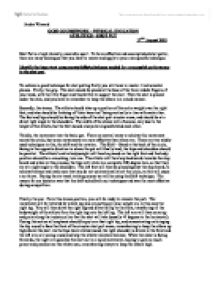 Identify the important components/skills/techniques needed for a successful performance in the shot put.

GCSE COURSEWORK - PHYSICAL EDUCATION ATHLETICS - SHOT PUT 17TH August 2003 Shot Put is a high intensity, anaerobic sport. To be an effective and accomplished shot putter, there are many techniques that you have to master and apply to your own specific technique. Identify the important components/skills/techniques needed for a successful performance in the shot put. To achieve a good technique for shot putting firstly you will have to master 4 instrumental phases. Firstly, the grip. The shot should be placed at the base of the three middle fingers of your hand, with the little finger and thumb free to support the shot. Then the shot is placed under the chin, and you have to remember to keep the elbow in a raised manner. Secondly, the stance. The athlete should take up a position of his entire weight over his right foot, and also should be thinking of "chin-knee-toe" being vertically in line with each other. The feet and hips should be facing the side of the shot putt circular arena, and should be at a direct right angle to the shoulders. The width of the stance will of course, vary due to the height of the athlete, but the feet should always be aligned behind each other. Thirdly, the movement into the basic put. There are several ways to achieve this movement across the circle, but some movements are more effective than others are. There are two widely used techniques in this, the shift and the rotation. The Shift - Stand at the back of the circle, facing in the opposite direction to where the put will finally land, the hips and shoulders should be parallel. The athlete's entire bodyweight will then be placed on the right foot and the body position should be a crouching, low one. The athlete will then hop backwards towards the stop board and when in this process, the hips will rotate in a complete 180-degree turn, so that they are at a right angle to the shoulders. ...read more.

Then he went into the process of throwing the shot with elbow held high, which came to great effect. I believe that with time, effort and coaching Jordan has the required potential to do well in Shot Put. Jordan's Observation Grant has definitely made good progress over the training programme. The weaknesses that Grant had have been looked at during the programme and now been rectified. Such weaknesses as not releasing the shot at the optimum angle, remembering to swing the free arm round to achieve balance and rushing his performance have closely been monitored and now I can witness that these are not a factor for Grant anymore. He remembers to swing the arm round fully for balance and he believes it has helped him. He also now remembers to take his time over the entire process. Also, Grant has also looked at the optimum angle and now always knows the correct time to release the put. I believe that if Grant perseveres with shot put he has the talent and potential to succeed. Initial Assessment Attempt 1 Attempt 2 Attempt 3 Jordan 10.45 10.98 10.91 Grant 10.72 10.87 10.78 Final Assessment Attempt 1 Attempt 2 Attempt 3 Jordan 11.56 11.85 11.61 Grant 11.33 11.66 11.82 Here we can see that we both made startling progress over such a short period of time. With help of the training programme we have both improved our distances and we should be very pleased with our results. Teachers Views Mrs. Waite I observed Jordan and Grant many times and I believe these two were the best shot putters out of the group, and with the training programme I am pleased with the progress that they have both made. I am glad that they both stuck to the regime and followed it with detailed precision. This of course reaped rewards and after having put in 100% effort into the regime, the work has paid off. I feel these two could become accomplished athletes in the shot put domain and maybe someday compete in competition. Jordan Winnard ...read more.