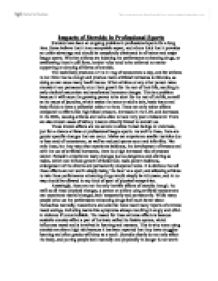 Impact of Steroids in Porfessional Sports

Impacts of Steroids in Professional Sports Steroids have been an ongoing problem in professional sports for a long time. Some believe that it is an acceptable aspect, and others think that it provides an unfair advantage and should be completely eliminated in all minor and major league sports. Whether athletes are injecting the performance enhancing drugs, or swallowing them in pill form, harsher rules need to be enforced no matter supporting or denying all forms of steroids. The male body produces 2.5 to 11 mg of testosterone a day, and for athletes to not think that is enough and produce more artificial hormones is ridicules, as doing so can cause many health issues. When athletes or any other person takes steroids it can permanently stunt their growth for the rest of their life, resulting in early skeletal maturation and accelerated hormone changes. This is a problem because it will cause the growing person to be short for the rest of his life, as well as the cause of jaundice, which makes the teens or adults skin, body tissue and body fluids to have a yellowish colour to them. ...read more.

It is obvious that all these effects are not worth simply being 'the best' at a sport, and allowing athletes to take these performance enhancing drugs would simply be inhumane, and in no way should be allowed in any kind of sport of physical competition. Amazingly, these are not the only horrific affects of steroids though. As well as all these physical changes, a person or athlete using artificial testosterone can experience mental changes, both temporarily and permanently. While many people who use the performance enhancing drugs feel much better about themselves mentally, researchers and scientist have heard many reports of extreme mood swings, including manic-like symptoms always resulting in angry and often in violence if uncontrollable. The reason for these extreme affects is because anabolic steroids affect a part of the brain called the limbic system, which influences mood and is involved in learning and memory. This is why teens using steroids are also a high risk because it has been reported that they have struggles learning and often grades will drop as a result. ...read more.

Not only that, but it can affect the lives of themselves and the rest of their family, resulting in physical abuse and disorder due to random anger outbursts and other mood changes. Even if there were no affects of anabolic steroids physically or mentally, I strongly believe that an athlete should get to his goal from purely enhancing himself physically and mentally by hard work, not by artificial means. It's not fair to allow some athletes to cheat their own bodies, while other athletes work extremely hard to get as good at the sport as they are. In the modern area that we live in, where segregation, racism and denied human rights are punished extremely, it would seem simply stupid to allow any human beings to afflict damage mentally, physically and emotionally to themselves. For these reasons, and to provide a fair playing field for all athletes I strongly support the banishment of all performance enhancing drugs, artificial hormones and anabolic steroids in society, major league sports and minor league sports. Sources: http://teens.drugabuse.gov/facts/facts_ster1.php http://en.wikipedia.org/wiki/Steroid http://www.steroid.com/ ...read more.