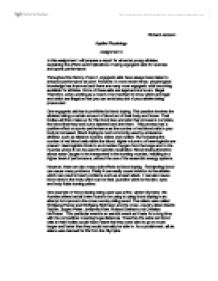 In this assignment I will prepare a report for aimed at young athletes, explaining the effects and implications of using ergogenic aids for exercise and sports performance.

Richard Jackson Applied Physiology Assignment 4 In this assignment I will prepare a report for aimed at young athletes, explaining the effects and implications of using ergogenic aids for exercise and sports performance. Throughout the history of sport, ergogenic aids have always been taken to enhance performance at sport. However, in more recent times physiological knowledge has improved and there are many more ergogenic aids becoming available for athletes. Some of these aids are legal and some are illegal. Therefore, when working as a coach, it is important to know which are legal and which are illegal so that you can avoid any risk of your athlete being prosecuted. One ergogenic aid that is prohibited is blood doping. This practice involves the athletes taking a certain amount of blood out of their body and frozen. Their bodies will then make up for this blood loss and after that process is complete, the blood that they took out is injected back into them. This process has a positive effect on sports performance as the number of red blood cells in your body is increased. Blood doping is most commonly used by endurance athletes, such as distance runners, skiers and cyclists. By increasing the number of red blood cells within the blood, higher volumes of haemoglobin are present. Haemoglobin binds to and carries Oxygen from the lungs and to the muscles where it can be used for aerobic respiration. ...read more.

An example of the consequences that diuretics can cause is in boxers. They used to have the weigh in on the day of the fight. This meant that any boxer using diuretics would have to use them on the same day as they were fighting. The diuretics would get rid of any excess water in the body but the problem was that it took away the layer of water between the skull and the brain. This layer of liquid protects the brain from hitting the side of the skull when knocked. Therefore, without this protection, many boxers developed brain damage after years of boxing. Another prohibited ergogenic aid is beta blockers. Beta blockers are banned in many sports due to their ability to slow the heart rate. It is precision sports such as snooker, darts and diving that they improve performance in as they give you more control over slight movements. Beta blockers are normally given for the treatment of angina, high blood pressure, irregular heart beats or following a heart attack. They act by interfering and inhibiting certain nerve impulses being transmitted through the nervous system. They act by reducing the demand of oxygen required by the heart, lower heart rate and reduce the production of adrenalin. There are many possible side-effects of these drugs, but some people may not suffer from any. Possible effects include dizziness and fainting caused by the medications lowering heart rate too much and blood vessels can narrow causing cold and pale fingers and toes. ...read more.

These have been seen to not improve sporting performance and therefore are not banned. However, they could be used to help a performance in certain sports. Paracetamol work as pain killers. Therefore, any sport that requires its participants to go through pain may benefit from paracetamol. One example of a sport where athletes go through pain in is boxing. If boxers took some paracetamol before going out to fight, it is possible that it will help cover some of the pain when they are getting punched. They are most commonly used for aches such as head aches so they may also stop the boxers from getting head aches after being punched. It is not just contact sports however that deal with aches and pains. Nearly all sports at the top level require its participants to push their bodies to their absolute limit and through the pain barrier. A sport such as long distance running for example will cause a lot of aches on the athlete's body and paracetamol will help cover these. There are very few side effects to paracetamol as they are widely used by everyone to stop pains. This means that we know more about the dangers than we would of a new drug that may be illegal, as it is used by less people. The only danger would be if the athlete took an overdose which could cause serious problems or be fatal. gordan bennit steroids, diuretics, blood doping, pshycology, altitude training and paracetamol gordan bennit steroids, diuretics, blood doping, pshycology, altitude training and paracetamol ...read more.