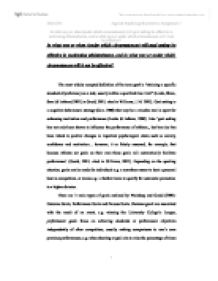 In what way or when (under which circumstances) will goal setting be effective in motivating athletes/teams, and in what way or under which circumstances will it not be effective? The most widely accepted definition of the term goal is "attaining a specific standard of proficiency on a task, usually within a specified time limit" (Locke, Shaw, Saari & Latham (1981) in Gould, 2001, cited in Williams, J. M. 2001). Goal setting is a cognitive-behavioural strategy (Cox, 1998) that may be a valuable tool in sport for enhancing motivation and performance (Locke & Latham, 1990). Also 'goal setting has not only been shown to influence the performance of athletes.., but has also has been linked to positive changes in important psychological states such as anxiety, confidence and motivation... however, it as falsely assumed, for example, that because athletes set goals on their own these goals will automatically facilitate performance' (Gould, 2001, cited in Williams, 2001). Depending on the sporting situation, goals can be made for individuals e.g. a marathon runner to beat a personal best in competition, or teams e.g. a football team to qualify for automatic promotion to a higher division. There are 3 main types of goals outlined by Weinberg and Gould (1999): Outcome Goals, Performance Goals and Process Goals. Outcome goals are associated with the result of an event, e.g. winning the University College's League, performance goals focus on achieving standards or performance objectives independently of other competitors, usually making comparisons to one's own previous performances, e.g. when shooting at goal aim to raise the percentage of times the target is hit, and process goals are concerned with the actions an individual must engage in during performance to execute or perform well, e.g. to get you head over the ball and strike it with the laces of your boot when taking a penalty kick. It has been suggested that it would be more beneficial to set performance and process goals to individuals and teams, as these goals emphasise personal quality and ...read more.

The results show that setting goals, whether they are medium or hard enhances performance in comparison to not setting goals, or 'doing your best'. Although this study was conducted on university undergraduates from both team and individual events, the goals that were set were not set for a group goal, only individuals. The results gained therefore may not extrapolate to a team setting, such as football. However, Lerner & Locke (1995) do highlight that the goals set enhances endurance performance, so this in turn could be related to football, in that it is an intermittent sport over 90 minutes which requires a good level of cardiovascular endurance. Kingston & Hardy's (1997) study attempted to control the effects of spontaneous goal setting, motivation, competition, while examining the effects of two different goal-setting training programs on performance of a complex task - a round of golf. Thirty seven golf club members of various abilities (handicap range of 0-28) took part in the season long study in which both long-term and short-term goals were set. The golfers were set into three test groups: Control; Process orientated goals; and Performance orientated goals, by means of stratified random sampling, very similar to that observed in the study by Lerner & Locke (1995). In the study the data collection occurred in three phases; pre-season, week 23, and week 54, with the goal-setting training in between. The purpose of the investigation was to determine the relative efficacy pf process and performance goals over a voluntary control condition on terms of affective, motivational and other performance-related variables (Kingston & Hardy, 1997). Follow up tests indicated that the process-orientated group improved their skill level (as indicated by handicap) significantly from week 0 to week 23 (p<0.01), whereas the performance-orientated group did not show any significant improvement on skill during that time, however there was a significant improvement between week 0 and 54 (p< 0.05). ...read more.