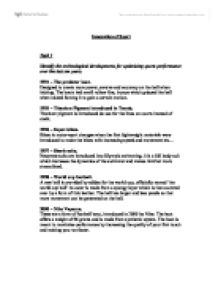 Innovation of Sport Task 1 Identify the technological developments for optimising sports performance over the last ten years. 1994 - The predator boot. Designed to create more power, swerve and accuracy on the ball when kicking. The boots had small rubber fins, bumps which gripped the ball when kicked forcing it to gain a certain motion. 1995 - Titanium Pigment introduced in Tennis. Titanium pigment is introduced do use for the lines on courts instead of chalk. 1996 - Super-bikes. Bikes in motor-sport changes when the first lightweight materials were introduced to make the bikes with increasing speed and movement etc... 1997 - Shark-suits. Neoprene suits are introduced into Olympic swimming, it is a full body suit which increases the dynamics of the swimmer and makes him/her more streamlined. 1998 - World cup football. A new ball is provided by adidas for the world cup, officially named 'the world cup ball' its outer is made from a spongy layer which is then covered over by a form of thin leather. The ball has larger and less panels so that more movement can be generated on the ball. 2000 - Nike Vapours. These are a form of football boot, introduced in 2000 by Nike. The boot offers a weight of 96 grams and is made from synthetic uppers. The boot is meant to maximise performance by increasing the quality of your first touch and making you run faster. 2003 - Playing jerseys. Different playing shirts were introduced to the game adding benefits for both the game itself and the player wearing it, the first appearance was in the rugby six nations where England and France wore the new Nike Dry-Fit shirt. Here I have decided to talk about differences between the Nike Vapour and the Adidas Predator football boots. Nike Vapour Adidas Predator VS. We find here that the two boots are extremely different and have quite contrasting purposes. ...read more.

Disadvantages * The material is not indestructible can be ripped * The materials and research into the shirts is expensive making the shirts costly. Analysis (impact) In 1995 when rugby became professional it had a huge positive impact on the game, it brought more players into the game, as they knew that they can make a career of playing as they where going to be paid. More money can be brought into the game, which would mean more technological advancements etc. In 1996 with Leicester Tigers brining SAQ training into rugby, had a huge impact in rugby as it make the players faster and make them more able to evade contact, this would improve the speed of which the game is played, this is a huge positive for the game as it makes the game more exciting to watch and play. When the sin bin was introduced in 1997, it had a both positive and negative affect on rugby. The positive affect is that, it will persuade players not to cheat as they and their team will suffer, as their team will be one player down for ten minuets and they will be off the pitch and not able to play. The negative is that sometimes referees get the decision wrong and sin bin the wrong player which can turn a game and make the team that deserves to win loose. The video replay and video referee has had a really positive impact on the game, it allows teams to sight opposition players for infractions, also allows referees to make the correct decisions. Also the referee can look up to the TMO to see whether or not a team has scored a try. However the video replay can slow the game down, and can annoy fans and takes responsibility off referees and linesmen. The new light weight footballs for football designed in 2001, had a positive affect on the players, as it made it easier for them to get power on the ball with more accuracy and allowed them to do skills easier. ...read more.

Critical analysis Through the years of sport massive advances have occurred in more ways than just sports attire but the way the game is played, the media that surrounds the game and the money involved this assignment has mainly focused on the advances of technology in the football boot. The football boot has move on through time along with its sort changing consistently to suit the needs of its environment becoming lighter, weighted, slimmer, fatter, thinner or thicker material, breathable or not, studded, bladed, or moulds, laces to the side front middle back, ankle support toe capped. All these different changes to the football boot make it more comfy to wear more efficient to perform a skill in like the addias preditors had a grip on the side of the boot in order to control the ball better. But the best way to critically analyse to advances in technology is to file it down to advantages and disadvantages of the progression in sports technology. Advantages: * Shoes and clothing becomes more breathable meaning hygiene during the game improves * Attire becomes climate applicable, you can get top that keep you warn in winter and cool in summer * Protective attire is more design to the joint due to research and therefore prevents any further injuries * Newly engineered boots allow better movement and support for players * Wearable protection prevent injuries * Lighter weight clothing allows more movement and comfort Disadvantages: * Newly engineered protection allows a harder more aggressive game to be played which could result in injuries * Newly engineered sports equipment allows a faster game * New products with added research cost more to purchase and insure Although the positives out weigh the negatives by far there are still some draw backs to the advances in technology. The advances in technology allow the game to become harder faster and therefore the risk of injury becomes greater. The sports adapt to the technology allowing the game to grow with the research and developments. ...read more.