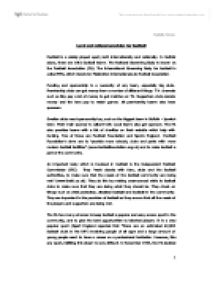 Natalie Jones. Local and national provision for football Football is a widely played sport, both internationally and nationally. In Suffolk alone, there are 1401 football teams. The National Governing Body is known as the Football Association (FA). The International Governing Body for football is called FIFA, which stands for F�d�ration Internationale de Football Association. Funding and sponsorship is a necessity of any team, especially big clubs. Premiership clubs can get money from a number of different things. T.V. channels such as Sky pay a lot of money to get matches on TV. Supporters clubs donate money and the fans pay to watch games. All premiership teams also have sponsors. Smaller clubs need sponsorship too, such as the biggest team in Suffolk - Ipswich town. Their main sponsor is called E.ON. Local teams also get sponsors. The FA also provides teams with a list of charities on their website which help with funding. Two of these are Football Foundation and Sports England. Football Foundation's aims are to "provide more schools, clubs and parks with more modern football facilities" (www.footballfoundation.org.uk) ...read more.

The amount of funding that the government gives these primary schools for equipment for football is low compared to other countries; therefore children in England have less of an advantage because they don't have a chance to play as much as they could. In Suffolk, the provision for football is not as good compared to other places such as London, as shown in the bar-chart: [Source: Suffolk and London FA] However, some schools in the local area provide the opportunity to partake in a football community scheme. At Bardwell Primary School in early 2007, the semi-professional club Cambridge City FC ran an extra-curricular football training session weekly for a term. At Barnham Primary School, Ipswich Town gives compulsory training sessions once a week as part of the curriculum for all pupils. This encourages children to start football early. Although both males and females play football, it is much more popular with men. Men's leagues have much more media coverage and money involved - you rarely hear of woman's leagues or matches. For example, the men's world cup is scheduled so no other major sporting events clash with it. ...read more.

Only one football club currently has a disabled football team - Ipswich town. Only recently has disabled football become available; the Suffolk FA stated that it was only "Last May that the very first Coaching disabled footballers course was held in Suffolk". (SuffolkFA.com 2007). There are fifteen leagues specifically for disabled people and about 110 football clubs in England also have a disabled team. However, although there are facilities for disabled people in England, they are rarely advertised and the majority of people are unaware that disabled teams exist. Overall, the local and national provision for male football in this country is very good. The FA has put in place many schemes such as Academies and there are thousands of football teams for players of all skill levels. Male teams get a lot of publicity and the players are often idolised. However, for women and the disabled, the provision is poor, with little publicity. Female football players are relatively unknown to the public. Woman's football matches are on in the early hours of the morning, which would never happen to a men's match. However, woman's football is becoming more popular and with more girls playing football, the demand for teams and more provision will increase. ...read more.