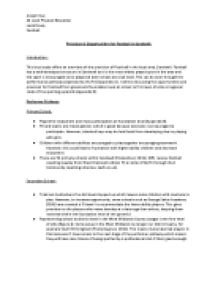 ﻿Joseph Guy AS Level Physical Education Local Study Football Provision & Opportunities for Football in Sandwell: Introduction: This local study offers an overview of the provision of Football in the local area, Sandwell. Football has a well-developed structure in Sandwell as it is the most widely played sport in the area and the sport is encouraged to be played at both school and club level. This can be seen through the performance pathway organised by the FA (Appendix A). I will be discussing the opportunities and provision for Football from grassroots foundation level at school to first level of elite at regional clubs of the sporting pyramid (Appendix B). Performer Pathway Primary School: 1. Played for enjoyment and mass participation at foundation level (Appendix B). 2. PE and teams are mixed gender, which is good because everyone is encouraged to participate. However, talented boys may be held back from developing due to playing with girls. 3. Children with different abilities encouraged to play together encouraging teamwork. However, this could lead to frustration with higher ability children and decrease enjoyment. 4. There are 96 primary schools within Sandwell (findaschool, 2011). 80% receive football coaching weekly from West Bromwich Albion FC or Aston Villa FC through their Community coaching schemes. (avfc.co.uk). Secondary School: 1. Trials are held where the skill level stepped up which leaves some children with nowhere to play. However, to increase opportunity, some schools such as George Salter Academy (GSA) ...read more.

Owned, run by commercial companies or clubs. 2. Academies - good facilities, financial backing; facilities are well looked after. 3. Clubs ? Tividale F.C, Tipton Town etc - receive money through sponsors, gate receipts, hiring out facilities giving youths the opportunities to play in a small ground. 4. Netherton Colts under 18?s for example pay a yearly subscription to Tividale FC for use of Tividale?s main ground, The Beeches. 1. There are 2160 footballers in the Sandwell area, working on the fact that there are 135 teams in the area. (Based on 14 players per team) (Express & Star, parklife) 2. However, there are far higher numbers of casual footballers who enjoy playing football on the park. Many of these people many not have the time or ability to play in an organised team. These are foundation level performers. Additional Agencies: 1. The Football Foundation is one of the largest sports charities in the world (footballfoundation.org.uk). Funded by the Premier League, the FA and Government, it?s a partnership between Central Government and the UK's leading sports industry. The Football Foundation will assist local clubs such as Tividale in gaining grants. FA Charter Standard: 1. Scheme created by the FA in 2001 to improve footballing standards across England. 2. Clubs benefit from football kit and equipment grants such as new safe goalposts. In 2010 Netherton Colts FC got granted two new football kits per year, per team for the next five years at a hugely subsidised cost through the scheme. ...read more.

Referees can earn more if they referee adult matches and progress through the levels. 3. Having the incentive of income in a ?deprived? area such as Sandwell may encourage people to qualify as referee?s to earn extra cash. Schemes: 1. In 2010 The FA?s launched the ?respect? campaign to stop abuse and cut down the number of officials leaving the game due to it. 2. The Referees? association offers referee training taught by former top level officials, such as Dermot Gallagher. This will attract people in Sandwell to the course as they have an expert to teach it who has made it at the top level. Disability: 1. Disabled matches are run by people who have done the disability coaching course unless a referee has experience at officiating disabled matches. 2. Currently, disabled people will not be found refereeing abled bodied matches due to often lack of mobility, awareness, or physical strength. 3. However, currently the disabled matches taking place in Sandwell are officiated by referees from around the country. However, officials from Sandwell would be able to officiate disabled fixtures if there was more fixtures played in the region. Gender: 1. Female officials take the same qualification route in England as male officials. 2. More female referees and lineswomen in the football league, encourages women to further get involved in officiating. 3. The FA have a support network for female officials, to help stop female officials being forced out of the game if they get abused. 4. Despite this, there are still only 2 female referees registered by the Sandwell Minors League for the 2012-13 season. This shows more still needs to be done to increase numbers of female officials. ...read more.