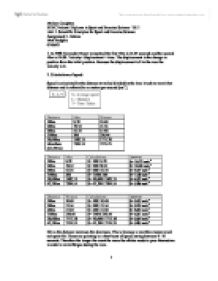 The injuries cause by theses forces can range from anything to a contusion to a fracture. A common type of fracture is compression fractures which is caused by a significant trauma. This could not only lead to fractures by also soft tissue damage to the ligaments and tendons. Chronic injuries may also be causes of injuries induced by shock and impacts. For example inappropriate footwear or the wrong type of surface can be a cause of overuse injuries. In order to reduce the chance of overuse injuries the shock needs to be absorbed other than by the body. For example running on soft surfaces or having footwear with good shock absorption will produce fewer injuries. Many sports involve projectiles. Projectiles are considered to be any object which has no external forces acting upon it other than gravity. An object that is said to be a projectile is if experiences no air resistance, as this would be an external force. However all objects are looked upon as projectiles. The shape of the flight path of a projectile would be symmetrical if we discount air resistance and lift. Air resistance, which causes a drag force, and aerodynamic factors, that cause lift, will act to shorten or lengthen the flight path of a projectile. ...read more.

Thus, the average angular velocity of a rotating object is defined as the angular displacement divided by the time taken to turn through this angle. Given that inertia (i.e. objects are reluctant to move angularly) a force is needed to produce angular motion. For example a tennis player putting a topspin on a ball must provide a force toward the top of the ball. This force allows the ball to spin in an angular motion. The turning effect produced by a force called torque. A torque is equal to the product of the force and the distance between this force and the axis of the rotation. This distance is referred to as a moment arm because a torque is sometimes termed a moment of force. The units of measurement for torque are Nm. Torque is vector quantities, they are direction specific. In the case of the player who has just hit the topspin on the right side of the court, if the view was of the player that just hit the topspin the direction of the force would be anticlockwise. If the same player put a clockwise force on the ball, this would be backspin. ?? ?? ?? ?? Melissa Creighton BTEC National Diploma in Sport and Exercise Science- YR 1 Unit 1- Scientific Principles for Sport and Exercise Science Assignment 3- Motion Matt Hodgkin 07/06/07 1 ...read more.