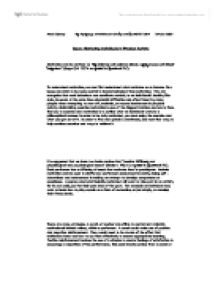 Nicola Quincey The Psychology of Individuals in Groups and Sport SPO 1004 13th Dec 2002 Essay- Motivating Individuals in Physical Activity Motivation can be defined as "the internal and external stimuli, which arouse and direct behaviour" (Sage G.H 1974 as quoted in Sport and P.E). To understand motivation, we must first understand what motivates us as humans. Few issues can claim to be more central to human behaviour than motivation. We can recognize that much behaviour can contribute notably to an individual's healthy life-style, however at the same time substantial difficulties are often faced by many people when attempting to start off, maintain, or resume involvement in physical activity. Maintaining exercise motivation is one of the biggest barriers one has to face. The key to exercise and motivation is to outline what an individual wants in a philosophical manner. In order to be truly motivated, you must enjoy the exercise and what you get out of it. In order to find and uphold commitment, one must find ways to help continue exercise and ways to achieve it. It is suggested that we have two basic motives that "require fulfilment, our physiological and psychological needs" (Maslow 1954 as quoted in Sport and P.E). ...read more.

Goal setting is generally seen as an extremely influential method for enhancing intrinsic motivation. "A goal is what an individual is trying to accomplish. It is the object or aim of an action" (Lock, 1981as quoted in Sport and P.E). A coach must carry out this method carefully. Goal setting can be capable of helping a performer's self confidence, enhance intensity and persistence, the performer's attention and by and large and have a positive effect on performance. Goal setting can allow a performer to cope with stress provoking situations, thus controlling and limiting the amount of arousal and anxiety used. Yerkes and Dodson Inverted 'U' Hypothesis proposed that "as arousal levels increase, so does the level of performance, but only up to an optimum point, which is usually reached at moderate levels of arousal" (Thompson. G et al 2000). The theory suggests that beyond the point of arousal, a performer's performance will worsen. There are several reasons that can determine the optimum point of arousal. Fine movements and complex skills, which require large amounts of attention, require a lower arousal level e.g. snooker, archery etc. It also depends on what type of skill level an athlete has reached. ...read more.

Here the coach has two options to give feedback. He or she could give motivating "You managed to intercept the ball very well today, well done!" Information about the success of a performance or even part of the performance can enhance her motivation. However the feedback could be some what informational. "Ok, today went well, but let's try and work on your aggression within the game so all of your interceptions are done successfully". This type of feedback "provides information about (a) the specific behaviours that should be performed, (b) the levels of proficiency that should be achieved and (c) the performer's current level of proficiency in the desired skills and activities" (R. Weinberg & D. Gould 1995) I believe that in order to engender a feeling of enthusiasm and motivation, the coach must understand their performer's motives for involvement, and work around them to suit the traits of the individual. They must play an essential role in the motivational environment and ultimately use their behaviour adjustments to change negative participant motives. In addition the coach would also benefit from recognising the non- motivational factors that influence a sports performance and behaviour and learn to assess whether motivational factors may be readily changed. ...read more.