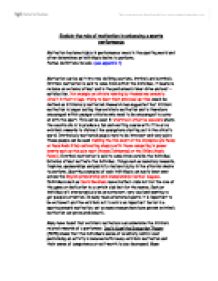 Explain the role of motivation in enhancing a sports performance Motivation features highly in performance levels in the sporting world and often determines an individuals desire to perform. Formal definitions include: (see appendix 1) Motivation can be split into two defining sections, intrinsic and extrinsic. Intrinsic motivation is said to come from within the individual, it bears no reliance on external stimuli and is the performer's inner drive and self - satisfaction. For example an athlete running by themselves around a circuit in their village, trying to beat their previous lap time would be defined as intrinsically motivated. Research has suggested that intrinsic motivation is longer lasting than extrinsic motivation and is therefore encouraged within younger athletes who need to be encouraged to carry on with the sport. This can be seen in 'startrack' athletics sessions where the coach's aim is to produce a fun and exciting course with little or no extrinsic rewards to distract the youngsters starting out in the athletic world. Intrinsically motivated people tend to be introvert and very quiet. ...read more.

Coaches have to be aware of motivation techniques when coaching a sports-person. There are many strategies to enhance motivation within the athlete and to be successful they must be taken into account. (see appendix 2) Arousal levels have close links with motivation and enhancing sports performance. Arousal levels vary naturally with biological rhythms but also in response to a range of environmental triggers. There have been various theories and research evaluations put forward to link arousal to performance and motivation. One such theory is the 'Reticular Activating System' theory. (see appendix 3) Drive theory (developed by 'Hull' and 'Spence') suggests that increasing levels of drive (arousal/motivation) will increase the performance of well learned dominant responses in a linear manner. (see appendix 4) The 'Inverted U' theory is often regarded as the optimal theory to explain arousal against performance. (see appendix 5) The type of sporting activity, the level of performer expertise and the personality of the performer all require different optimal levels of arousal. (see appendix 6) Research has shown (Nideffer 1976) ...read more.

When setting goals/targets a coach/trainer should tend to use outcome goals minimally and generally focus more on the athlete's performance. Outcome goals set the athlete on winning/the end result, resulting in low levels of achievement motivation and them becoming a NAF performer. Performance goals however are set to be judged against ones performance and how they achieved rather than what they achieved. Goals should follow the SMARTER guidelines to prove effective and increase performance levels: (see appendix 8) Goals also need to prioritised into short term or long term focal points: (see appendix 9) Without goals a sports player would almost definitely not be motivated to improve and strive for better performances. They wouldn't have anything to look to and would not feel the need to push themselves. Therefore goal setting plays a large role in motivating a sports performer. Motivation has been heavily researched throughout time and much is yet to be discovered about how the human mind works. Yet we do know that motivation is one of the main mental factors in sporting performance. The overriding conclusion from all sources and researchers is that motivation depends on an individual's character and how their personality reacts to different situations. ...read more.