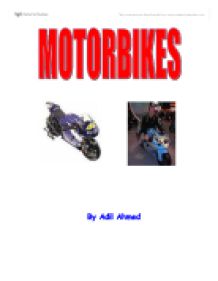 By Adil Ahmed "Motorbikes are great and I love them". This is a quote said by famous rider Robert Hughes. I totally agree with this quote because I have always had an interest in motorbikes. But I have always wanted to find out about the history of motorbikes. This is why I have chosen to do my informational essay on motorbikes and the history of motorbikes. Apart from talking the history of motorbikes I will tell you other things such as the different kinds of bikes, the safety, a famous rider, my favourite bike and the leading motorbike brands. After doing my essay I hope that I learn lots of new things about motorbikes and also teach you many facts that you didn't before. I will start off by telling you about the history of motorbikes. The inspiration for the earliest dirt bike and arguably the first motorbike was designed by the German inventors Gottlieb Daimler and Wilhelm Maybach in Stuttgart in 1880s.However if one counts two wheels with steam propulsion as being a motorcycle, then the first one may have been American. One machine was demonstrated at farms and circuses in the eastern US in 1867 which was built by Sylvester Howard koper of Roxbury. Police officers have used motorcycles primarily for the enforcement of traffic laws from the 20th century, called motor officers in the United States, these officers call their vehicles simply 'motors'. ...read more.

In courses designed by the motorcycle foundation throughout the United States, the common student justification is 'the feeling of freedom'. Although they are dangerous motorcycles are a very economical mode of transport, with advantages in ease of parking and ability to avoid heavy traffic. So, in order for motorcycle manufacturers to keep motorcycles selling they must make sure the bikes are 100% safe and make it as least dangerous as possible. When people think of motorbikes then they think that there is only one type of bike but in actually there are 16 different types of motorcycles for many different uses. The most common types of bikes are the Moped, Scooters, Sport bikes, Cruisers, Choppers and Diet bikes. For all the different types of bikes I've just mentioned I will tell you a brief description and what they are used for. Moped bikes are small, light, and inexpensive and also efficient rides for getting around town. It is usually started off by pedalling. Another common type of common bike is the Scooter which is a motorbike with a step through frame and generally was smaller wheels than those of a tradional motorcycle. Choppers are highly customised motorcycles based on a cruiser - style frame with long rakes (longer front forks) and wild paint jobs. This type of bike is created more for show than dependability. ...read more.

He first lept to fame by winning the 250cc race in1979 on a Yamaha. His wins in the US super bike championship in 1981 and 1982 were commemorated by the much-prized Eddre Lauson Kawasuk; z1100r replica. His fourth grand prix crown in 1987 for Kothmans Honda made Lauson rider to win the 500cc title in consecutive seasons on different machines. He signed for the Italian Cagiva team in 1990 for one of the biggest fear ever seen in bike sport. The Californians win for Italian factory at the Hungarian 500cc GP in 1991 was the team's first GP victory in ten years. Factory boss was so pleased that he promptly gave Lauson Ferrari Teftarossa. In conclusion my opinion on motorbikes is that they are great type of vehicles because they are small and fast and can be driven easily. I have told you many things about motorbikes such as the history of motorbikes, different types of bikes and my favourite bike. As telling you about these motorbike topics I have told you many facts for example one of the first motorbike company that is still running is the Harley Davidson. I have also told you that there are 16 different types of motorbikes. I hope that I have covered all the different topics that I was going to do and that you have learnt something new about motorbikes because I know that I have learnt tons of new stuff about my topic that I did my informational essay on which is MOTORBIKES!!!!!!! ...read more.