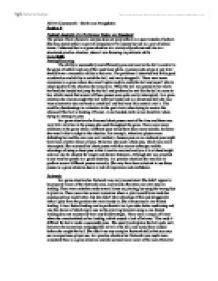 Netball Analysis of a Performer Below my Standard.

Netball Analysis of a Performer Below my Standard The person I have chosen to analyse does not play netball as a sport outside of school. She has played netball as part of compulsory P.E lessons but not as a part of school teams. I observed her in a game situation in a variety of positions and also in a structured practice situation, where I was focusing on particular skills. Core Skills Passing/Receiving The ability to successfully and efficiently pass and receive the ball is central to the game of netball and one of the most basic skills. A person who plays at any level should have a reasonable ability in this area. The performer I observed had fairly good coordination and ability to catch the ball, and rarely dropped it. There were some occasions in a game where she wasn't quite ready to catch the ball and wasn't able to adapt quickly to the situation she was put in. When the ball was passed to her above her head she tended not jump for the ball and preferred to wait for the ball to come to her, which meant that several of these passes were quite easily intercepted.. ...read more.

Shooting The player I analysed favours attacking positions, and her strength within the game is shooting, therefore her shooting skills are of equal standard if not better than mine. Her aim was quite accurate and she was fairly consistent, particularly when in a practice situation. Her close shots are more consistent than her distance shots. When she takes shots from near the edge of the goal circle, they tend to fall short or go much to high. In a game situation she tends to panic and doesn't take her time over her shots, which means that she is not always as accurate as she could be. Although she is quite a competent shooter, there are some occasions where passing to another player would be better than attempting a shot, for example when either very close of very far away from the goal. However, there were some situations where taking a shot went to her advantage as a pass would have probable been easily intercepted due to a well defended goal circle. In the game she didn't always recognise these options, and attempted a shot instead, and often an opposing player caught the rebound. ...read more.

Around the court, she seemed to lack in stamina and would often lose the pace of the game and her opponent would quite easily get free from her. She also tended to follow her opponent rather than leading her opponent around the court. Although this meant that she was making the effort to let her opponent get free, she also didn't take the opportunities she had to get into a good position, and her partner had much ore control over her movement during the game. She didn't use block marking at all when marking her opponent, which meant she wasn't always aware what her opponent was doing, and could not mark the ball if her opponent had it. She would often stand in front of her opponent when stationary, but would forget to watch her opponent making it possible for them to move free. She would also use a side stance. This was quite good as it enabled her to watch her opponent and the game situation. She wasn't always aware of opportunities to intercept the ball and didn't react quickly enough or misjudged the timing of the throw, but she did make a couple of successful interceptions during the game. AS P.E Coursework - Sarah-Jane Poingdestre Section B ...read more.