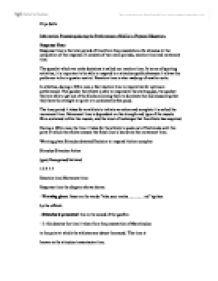 Nformation Processing during the Performance of Skills in Physical Education.

Information Processing during the Performance of Skills in Physical Education. Response Time Response time is the total period of time from the presentation of a stimulus to the completion of the response. It consists of two main periods, reaction time and movement time. The speed at which we make decisions is called our reaction time. In terms of sporting activities, it is important to be able to respond to a stimulus quickly because it allows the performer to be in greater control. Reaction time is also made up of smaller units. In athletics, during a 100m race, a fast reaction time is imperative for optimum performance. The quicker the athlete is able to respond to the starting gun, the quicker they are able to get out of the blocks allowing them to dominate the race (assuming that they have the strength to sprint at a consistently fast pace). The time period it takes for an athlete to initiate an action and complete it is called the movement time. Movement time is dependant on the strength and type of the muscle fibre contained within the muscle, and the level of technique that the athlete has acquired. During a 100m race, the time it takes for the athlete to push out of the blocks until the point at which the athlete crosses the finish line is known as the movement time. Warning given Stimulus detected Decision to respond Action complete Stimulus Stimulus Action (gun) ...read more.

Personality. Extroverts tend to have faster reaction times than introverts. This is because extroverts have more confidence, and are usually much more eager. Increased confidence leads to increased motivation and alertness (see below). State of Alertness/Motivation/Arousal. The more alert the performer is, the more likely they are to respond quickly. The more alert the performer is, the more prepared and concentrating they are. The more alert a performer is, the higher their arousal levels which leads to an increase in motivation. Length of Neural Pathways. The further the information has to travel, the longer it will take. This leads to a slower reaction time, which results in a slower response time. Feedback There are many types of feedback, each of which has a different function or purpose. All feedback occurs as a result of an action. It allows comparisons to be made between the athlete's performance and the 'model' of the correct skill allowing the correction of errors and minor adjustments to take place. Intrinsic feedback (inherent feedback) is a type of continuous feedback that comes from the proprioceptors. It occurs as a natural consequence of movement. Extrinsic feedback (augmented feedback) is feedback that is received from external forces. It is a supplementary form of feedback, which can be given by the coach, or by use of a video for example. It can also be used to help the performer develop intrinsic feedback. There are two types of extrinsic feedback. ...read more.

Feedback as punishment Coaches and teachers should ideally not need to punish, but players are not angels and occasionally misbehave or refuse to accept a coaches or teachers advice. Punishment carries risks and should be used sparingly and only if all other forms of feedback appear to be ineffective. However, punishment should not include physicality's, demean the learner or damage their self-esteem, be given in frustration or anger. Instead, punishment should be perceived as such by the learner. It should be given after warning, be used constantly and fairly against undesirable behaviour, not the person and be supplemented by positive reinforcement and motivational feedback. Feedback as motivation Learners are motivated when they have clear goals and want to achieve them. Goal setting in sport is an important element in learning and the good teacher or coach ensures that learners have clear, achievable goals to which they are committed. Motivational feedback gives learners information about their progress towards these goals. It helps them to understand the difference between their present performance level and that needed to achieve their goal. It is important that it also gives them self-belief and the confidence to continue to practise through the ups and the downs of learning. Breaking down long-term goals into intermediate goals is a helpful motivational strategy. Progress charts and training/competition diaries are useful in this respect, because they help the learner to see improvement. But often the most satisfying motivational feedback comes as acknowledgment of progress from the coach. ?? ?? ?? ?? Priya Sethi ...read more.