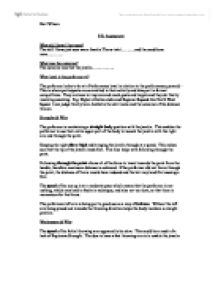 P.E. Assessment What skill have I just seen? The skill I have just seen was a Javelin Throw in/at...........and the conditions were............ What was the outcome? The outcome was that the javelin................. What level is the performer at? The performer looks to be at a Performance level in relation to the performance pyramid - This is where participants are committed to their activity and take part in formal competitions. They are keen to improve and reach goals and targets and they do this by receiving coaching. E.g. Higher athletics clubs and Regional Squads like North West Squad. I can judge this by how Aesthetic the skill looks and the outcome of the distance thrown. Strengths & Why The performer is maintaining a straight body position with the javelin. This enables the performer to use their entire upper part of the body to launch the javelin with the right arm and through the point. Keeping the right elbow high and bringing the javelin through at a speed. This makes sure that the tip of the javelin lands first. This also helps with following through the point. Following through the point allows all of the force to travel towards the point from the handle, therefore maximum distance is achieved. If the performer did not throw through the point, the distance of throw would have reduced and the tail may land first causing a foul. The speed of the run up is at a moderate pace which means that the performer is not rushing, which may lead to faults in technique, and also not too slow, so that there is momentum for the throw. The performers left arm is being put to good use as a way of balance. Without the left arm being placed out towards the throwing direction helps the body maintain a straight position. Weaknesses & Why The speed of the Initial throwing arm appeared to be slow. ...read more.

Throwing the javelin requires a lot of power. Gaining momentum and actually throwing the javelin requires both speed and strength, therefore it is power. This is enabling a high force to be given to the javelin so that it can go as far as possible. Use major weakness to improve (Realistic goal, timescale, practise points, and how to evaluate) One weakness of the performer that I previously mentioned was the speed of the Initial throwing arm appeared to be slow. A great way to improve on this is to increase Explosive Strength, and this can be done by weight training. The weight training should consist of arm exercises which consist of 3 sets of 8 reps at a moderate pace, and at approximately 70% of the maximum weight the performer is able to lift. Exercises could include Bicep Curls, Tricep Curls, Bench Press, and Shoulder Press. A goal can be created by increasing the weight in each exercise every 5 sessions, and the performer working their way up to what was originally their 80% maximum lift at the beginning, which will once reached, be 70% of their maximum lift. The timescale required will be a meso-cylce of about 8 - 12 weeks, and which will be out of season, such as winter. Preferably to maximise progression, 3 sessions a week appear to be the right number, and this should include micro-cycles that increase in difficulty which ensures progression. E.g. increasing the resistance in weights. Because at the start of the initial throw of the javelin, the performer seems to be low down, stopping an efficient push off from the ground, they could practise standing throws and being very conscious of how low they are positioned. A good way of evaluating is to measure the performers throw from a standing throw using only their arms, before the weight training started, and at the end of all the sessions, measure how far they can throw standing once again. An increase in distance shows more speed in the arm. Karl Wilson ...read more.