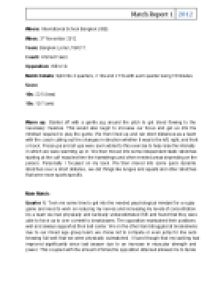 ﻿Match Report 1 2012 Where: International School Bangkok (ISB). When: 3rd November 2012. Team: Bangkok Lions U19/U17. Coach: Ahmed Fawzi. Opposition: ISB U19. Match Details: Split into 4 quarters, 2 10s and 2 15s with each quarter being 15minutes. Score 10s: 22:5 (loss) 15s: 10:7 (win) Warm up: Started off with a gentle jog around the pitch to get blood flowing to the necessary muscles. This would also begin to increase our focus and get us into the mindset required to play the game. We then lined up and ran short distances as a team with the coach calling out the changes in direction whether it was to the left, right, and front or back. Press ups and sit ups were soon added to this exercise to help raise the intensity in which we were warming up in. We then moved into some independent static stretches starting at the calf muscles then the hamstrings and other needed areas depending on the person. Personally I focused on my back. We then moved into some quick dynamic stretches over a short distance, we did things like lunges and squats and other stretches that were more sports specific. ...read more.

I made it to far more breakdowns than with the 10 a side game and found that I was rucking effectively. My motivation and focus had increased significantly as I no longer underestimated them and just focused on what I had to do. We chose to continue to not contest the line outs and rather wait to commit the tackle as soon as their catcher reaches the ground and give a strong and committed drive. This tactic proved to be very effective since our opponents never tried to change the throws. When we were in possession of the line outs, we knew we were physically at a disadvantage so rather than doing an orthodox throw, we threw to everyone in between. We threw successfully to the front man and over the line to a running back. ISB took quite some time to catch on to what we were doing. 6 minutes from time, this effort paid off and the front catcher, our No.8 caught a quickly taken line out and surged over the line putting us 5 points ahead. ...read more.

Physiological My ribs were hurting a lot due to the squeeze from the props and as the game progressed it grew more painful and it was affecting my game. I didn't want to go to ground as much because it would cause pressure on my ribs. Our forwards were bigger than their forwards but we were getting constantly beaten because their forwards were more athletic and in better shape than ours. Near the end of the game some of us began to tire, especially the forwards as our scrums grew weaker in power. Psychological I was in the right mind set throughout the game and apart from the scrums I was entirely focused on my surroundings and where the ball was travelling. MYSELF ELITE PERFORMER DIFFERENCE BETWEEN MYSELF AND THE ELITE PERFORMER TACKLES MADE 18 12 +7 SUCCESSFUL TACKLES 9 12 +3 UNSUCCESSFUL TACKLES 9 0 -9 % DIFFERENCE FOR TACKLES COMPLETED WITH THE ELITE PERFORMER 50% 100% 50% NUMBER OF BREAKDOWNS REACHED 23 13 +10 NUMBER OF BREAKDOWNS IN THE GAME 28 N/A N/A % OF BREAKDOWNS REACHED 82% N/A N/A AMOUNT OF BALL CARRIES OVER THE GAIN LINE 3 9 -6 % DIFFERENCE OF BALL CARRIES N/A N/A 66% MORE ...read more.