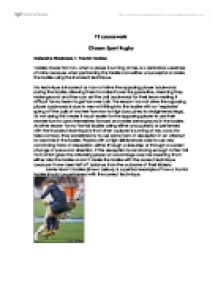 PE coursework Chosen Sport Rugby Defensive Weakness 1: Frontal Tackles Tackles made front on, when a player is running at me, is a defensive weakness of mine because when performing the tackle I am either unsuccessful or make the tackle using the incorrect technique. My technique is incorrect as I do not drive the opposing player backwards during the tackle, allowing them to make it over the game line, meaning they make ground and they can set the ball backwards for their team making it difficult for my team to get turnover ball. The reason I do not drive the opposing player backwards is due to me not hitting into the tackle with an 'explosive' spring off the balls of my feet from low to high (crouched to straightened legs). By not doing this I make it much easier for the opposing player to use their momentum to carry themselves forward and make some ground in the tackle. Another reason for my frontal tackles being either unsuccessful or performed with the incorrect technique is that when a player is running at me, about to take contact, they sometimes try to use some form of deception in an attempt to beat me in the tackle. Players with a high skill level are able to use very convincing forms of deception, either through a side-step or through a sudden change of pace and direction. If the deception is convincing enough I often fall for it which gives the attacking player an advantage over me meaning that I either miss the tackle or don't make the tackle with the correct technique because I have been left off balance from the outcome of their trickery. Jamie Noon's tackle (shown below), is a perfect example of how a frontal tackle should be performed with the correct technique. As the opposing player come in to make contact Noon prepares to make the tackle and watches the ball carrier carefully to ensure that he isn't fooled by a side-step or a sudden change of pace. ...read more.

He ensures to hold the ball at waist height and at arm's length and holds the ball at a 45-degree angle, this ensures that he will make contact with the centre of the ball and that his kick will be accurate. During the execution stage of his kick Wilkinson points the toes of his kicking foot down and releases the ball, he then ensures to make contact with the centre of the ball with the laces of his boot. Wilkinson non kicking leg is firmly set so as to provide a firm foundation and then he brings his kicking leg through the ball with rapid acceleration, this kick demonstrates excellent control and timing with a fluid action. During the follow-through stage of his punt kick Wilkinson keeps his head down with his body over the ball, he then brings his kicking foot up above his head for an effective follow-through which will increase the power of his kick. During this whole process of the punt kick Wilkinson ensures to keep his kicking leg straight and his toes pointed downwards. The theoretical reasoning behind my weakness to carry out a successful punt kick in defence during a game situation is because of negative stress or anxiety. Stress is often conceived as a negative feeling. However, there is a distinct difference between stress that has a positive effect and stress which has a negative effect. Seyle (1956) gave a broad definition of what stresses affect has upon an individual. 'The non-specific response of the body to any demand made on it.' This was take further by McGrath in 1970 who described why stress occurs within an individual he explained that 'A substantial imbalance between demand (physical and/or psychological demands) and the response capability, under conditions where failure to meet the demands has important consequences'. Therefore, when placed in a pressurised situation we may experience a stress reaction. ...read more.

Achievement motivation is an interactionist theory meaning that it is a combination of personality and an evaluation of the situational factors. The evaluation assesses two aspects: the probability of success (the difficultly of the task) and the incentive value of the success. This is relative to me as, despite the risk of getting tackled and ruining a try scoring opportunity, the incentive of scoring a try far out ways the risk. This is a problem as I am focusing on my own personal gain rather than that of my team. To correct this I must change my mind set in a game situation when playing as fullback. I must alter my approach behaviour patterns when attacking and realise the importance of offloading or drawing a player and passing to a teammate who is in a better position to score than I am, rather than trying to score myself in very difficult circumstances. I must focus on the achievements of the team rather than my own personal gain and remind myself that the overall outcome of the game is more important than my own personal success. This can be achieved by goal setting at the beginning of each match, for example I can set the challenge of assisting a try rather than actually scoring one for myself. Furthermore, I can set an outcome goal for the team to win no matter who it is that scores the points. Finally I can set the goal to be the supporting player for anyone who is in a try scoring situation, even if that means passing the ball to someone else and tracking them to the try line, this would mean that I would be there to score the tri in case they got tackled but would not be trying to claim the glory of a try for myself and would instead be putting the achievement of the team beyond the status of my own ego. ?? ?? ?? ?? ...read more.