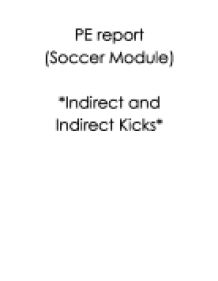 Note: the word in green represent the rule or offence we chose.

Soccer is a sport loved by millions of people in the world. The game is play on a field with goal post at 2 ends. In a typical game, there are 2 teams with 11 players on each side. The game is also govern by a set of rules.

What are free kicks?

Free kicks are rewarded when a player commits a foul. It means the team that is awarded the free kick would be able to pass/score without any opponent tackling or snatching the ball from them.

Free kicks can be categorized in to different ways; direct and indirect free kicks.

Direct free kick permits a direct shot on the goal.

And can be awarded when any of these offenses are committed.

To the opposing team:

In our video, the player in the orange vest (Player A) dribbles the ball and a player from the opposing team (Player B) sticks her foot out deliberately, tripping player A and causing player A to fall. This is considered as an offence and results in a direct kick.

In our video, as player A receives the ball, player B pushes him out of the way in which if the referee considers an offence will then result in a direct free kick.

In the video, before the ball even reaches player A , player B pushes him out of the way which is an offense which will result in a direct kick.

Even though in the video categorized as an indirect kick, a hand ball can be considered as a direct free kick; depending on the severity of the offence such as how close it is to the goal. This all will be determine by the referee.  In the case, he considers it deliberate and is close enough to the goal, this results in a direct free kick.

The indirect free kick requires the player to pass to another player before a shot can be taken.

And can be awarded if any of these offences are committed.

To the goal keeper:

As shown in our video, when the ball was passes to the goalkeeper, the held on to the ball for 6 sec as shown by the stop watch.  The referee then called it out and this will results in an indirect free kick.

In the video, it can be seen that when player A on the opposing team tries to pass the ball to his other team mate. Player C on the defending team snatches the ball away and passes it off to the goalie, which he then picks up with his hands. This is considered as an offense, as if a deliberate pass is made to the goalkeeper, he/she may not pick the ball up with his hands. If he/she does, it results in an indirect kick.

A hand ball is when, a player; accidentally or deliberately hands comes in contact with the ball during a play. Also depending on where it happens and the situation, which is decided by the referee, in a case where it is accidentally and not near the goal or penalty area, it would most probably be considered a direct free kick.

*all rules and offenses are retrieved from FIFA.com

Fifa (n.d) Laws of the game. Retrieved from: