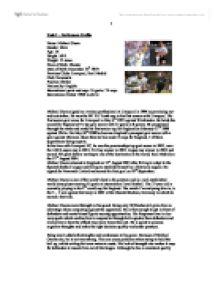 Task 1 - Performers Profile Name: Michael Owen Gender: Male Age: 26 Height: 5ft 8 Weight: 11 stone Place of Birth: Chester Date of Birth: December 14th 1979 Previous Clubs: Liverpool, Real Madrid Club: Newcastle Position: Striker Nationality: English International goals and caps: 35 goals / 76 caps International Debut: 1998 vs chilie Michael Owen signed as a trainee professional at Liverpool in 1996 as promising out-and-out striker. He won the 96' FA Youth cup in his first season with Liverpool. His first senior goal came for Liverpool in May 6th 1997 against Wimbledon. He holds the record for England u15's top goal scorer with 12 goals in 8 games. He progressed through the ranks and made his first senior cap for England on February 11th 1998 against Chilie. On May 26th 1998 he became England's youngest goal scorer with a goal against Morocco. Since then he has made 74 caps for England, 7 of them appearances being captain. In his time with Liverpool FC, he was the premierships top goal scorer in 2001, won the UEFA super cup in 2001, FA Cup winner in 2001, league cup winner in 2003 and scored 163 goals before moving to one of the best teams in the world, Real Madrid on the 13th August 2004. Michael Owen returned to England on 31st August 2005 after failing to adapt to the Spanish football league and failing to establish himself as a first team regular. He signed for Newcastle United and scored his first goal on 18th September. Michael Owen is one of the world's best in his position and is a well established world class player scoring 35 goals at international level football. The 27 year old is currently playing in his 3rd world cup for England. The match I'm analysing him in, is the 5 - 1 win against Germany in 2001 at the Munich Stadium, Germany in which he scored a hat trick. ...read more.

- There are big consequences for the winner and loser * Tactical and strategic - Strategies to out perform the opponents * Highly Structured - Making sure every player is given the chance to perform best of their ability * Organized - Everyone knows what to do, when and how to do it. Being a professional sportsman requires hours of practice. Many professionals, such as Michael Owen, do 5 or 6 training sessions a week and their training is mainly sport specific. (Match situations/skills used in a game). Link to Athlete The game against Germany was a very competitive game for England. If they won, they would have gone top of the world cup qualifying group and essentially booked their place in the 2002 world cup finals. Michael Owen and his team mates played to the best of their ability, and using the tactics the national coach (Sven Goran Ericsson) advised at the beginning of the match. Michael Owen was always eager to get on the ball. He chased every ball down, even pretty much lost causes because there was the slightest chance the defender could mess up and give Owen a glance of a goal scoring opportunity. He ran and tried his best for the full 90 minutes, and he was rewarded for his efforts by receiving the man of the match award. This is evidence of the competitive nature of this game. Owen abided by the rules of the game by giving away only one foul and receiving no yellow or red cards from referee Pierre Collina. The rules were also enforced by the referee's 3 assistants who ensured that players remained onside and flagged for any fouls that the referee might have missed or was undecided on. Michael Owen and England's desire to win was shown in the fact that he scored 3 goals and that England remained to press the German defence, even though Germany had a deficit of one, two, three and four goals. ...read more.

The Olympic ideal encourages the idea that 'the most important thing is not to win, but to take part' 'Citius, Altius, Fortius' is the Olympic motto which translates to 'Faster, Higher, Stronger'. Other Olympic symbols include Doves (which represent peace), Olympic Torch (Eternal flame which celebrates the coming together of 5 continents) and the Olympic Oath (taken by all athletes before competition). There is an idea of Olympism and there are six goals: > Personal Excellence > Educated Sport > Cultural Exchange > Mass Participation > Fair Play > International Understanding Link To Athlete The game was played at the Olympiastadion in Munich. At the time this was considered to be one of the best stadiums. With a capacity of over 69,000 and the best facilities available, this was considered one of the best stadiums in the world and was Michael Owens most important game in his career so far. This game was for the qualification stages of 2002 world cup and this was probably England's most important fixture of the group. If they won, it ensured them a place in the 2002 World Cup finals, the biggest footballing event in the world. Owen knows the importance of this competition to himself, his team mates and the rest of the English nation. He could earn hundreds of thousands of pounds through sponsorship and endorsement. Big companies know how much of a role model he is to young children and young footballer players and his name on a company product could greatly increase sales. Impact on Performance This was such an important game for England and Owen knew that if they were going to score goals...he would be the main provider. It was at one of the most important stages of this most prestige tournament in the world and he had to deliver. Every opportunity he had, he made the most of it and this is why he scored 3 goals. He was constantly running into space, looking for the ball, assisting other team mates and working at the hardest level possible. ...read more.