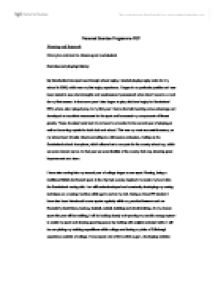 Personal Exercise Programme PEP Planning and Research Clear plan relevant to chosen sport and student Exercise and playing history My introduction into sport was through school rugby, I started playing rugby union for my school in 2005, which was my first rugby experience. I began in no particular position as I was been tested to see what strengths and weaknesses I possessed; when later I became a Lock for my first season. In that same year I also began to play club level rugby for Sunderland RFU, where also I played prop. In my first year I had a dramatic learning curve advantage as I developed an excellent awareness for the sport and increased my components of fitness greatly. These developments lead me to become a hooker in the second year of playing, as well as becoming captain for both club and school. This was my most successful season, as my school team (Castle View) was taking to a full season unbeaten, making us the Sunderland school champions, which allowed us to compete for the county school cup, which we were runners up too. In that year we were finalists of the county club cup, showing great improvement as a team. I have also coming into my second year of college began a new sport. Rowing, being a traditional British dominated sport, in the Olympic events, inspired me to join my local club; the Sunderland rowing club. I am still underdeveloped and constantly developing my rowing technique on a rowing machine within gyms and at my club. Being a A-level PE student I have also been introduced to new sports regularly within my practical lessons such as Rounder's, Badminton, hockey, football, netball, trekking and circuit training. As my chosen sport this year will be trekking, I will be looking closely at improving my aerobic energy system to assist my sport and develop good leg power by training with weights and plymetrics. ...read more.

The Trek will be a varied level of effort over a long period of physical fitness that could last hours or days so continuous training will need to be emphasised, more importantly, long slow distance (LSD) training that focuses on pace not speed. During continuous training, the aerobic energy system is been stressed, however, it lasts a longer period as heart rate is been exercised at 60-70% of maximum heart rate. This particular style of training is most commonly seen during what is known as the Pre-Season, which takes place (depending in sport) after the competitive games have ended, and or the beginning to prepare for the forthcoming season. The effects of cardiovascular training have several positives such as: * Bradycardia (resting heart rate is less than 60 per minute) * Reduce dead weight (Fat) * Increase in heart wall thickness, size and efficiency * Higher slow twitch fibre count * Capillirisation * Increase in Stroke volume and cardiac output High altitude training is a preferred style of training by sportsman when in distance events and the opportunity allows them. 'Exposure to high altitude could theoretically improve an athlete's capacity to exercise. Exposing the body to high altitude causes it to acclimatise to the lower level of oxygen available in the atmosphere. Many of the changes that occur with acclimatisation improve the delivery of oxygen to the muscles -the theory being that more oxygen will lead to better performance'. http://www.altitudephysiology.org/altitude_training.htm This exposure to high altitude will cause the body to go into a state of hypoxia, which is a lack oxygen circulating in the blood. This lack of oxygen will automatically cause the circulatory system to adapt to cope with the new demands by producing: * Lower lactate production (because reduced glucose breakdown decreases the amount of lactate formed). * Compensatory alkali loss in urine * Decrease in plasma volume * Increased Hematocrit (polycythemia) ...read more.

During my programme I did expect to come across some failures during my training as no training plan can be perfected to suit everybody. As my primary focus was on VO2 max, I did want to achieve higher results than was gained such as the 9.6 achieved in the multi-stage fitness test as I did want to gain a level 10 as a minimum, but further training may allow me to achieve even higher. Another major aim was to reduce my overall weight, during the programme I lost 1kg in weight, which isn't as also expected, as a personal aim was to loose around 3/4 kg of weight so a restructed diet and exercise will be used in further training. For further improvement I will look to change aspects of my goals (appendix 8) such as goal 1, the target date will be extended and different resources will be used such as outdoor training. Goal 2 was to reduce body fat, and again the date will be extended and changes in diet and more frequent training will be used. Changes wont be made to my own SWOT analysis as the same weaknesses are still apparent and need to be improved. Throughout my training I always reinforced the training principles in my training so mistakes are small but still the training itself was not a large success so it appears some training aspects may have not been correctly used. My Borg ratings during my training were not always high so higher intensity could be implemented as long as the training still exists in the aerobic phase, so frequency could be increased for further improvement. Other changes to my personal exercise plan could the specificity as gym work is not totally related to trekking as primarily trekking is a outdoors exercise so changes to exercise could be the use of outdoors exercise such as Fartlek, which also will give me more experience; improving motor skills. 1 Advanced PE for edexcel.Frank Galligan et al.2000 ?? ?? ?? ?? ...read more.