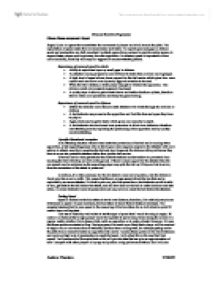 Personal Exercise Programme Chosen fitness component : Speed Rugby Union is a game that necessitates the movement of players and a ball around the pitch. The exploitation of space makes this movement easier and faster. To exploit space and gaps in defence speed and acceleration are both important. In attack, pace allows a player to exploit smaller spaces, to support faster players and to get away from the opposition. In defence, speed is important to allow more flexibility, reliability and scope for aggressive counter-attacking tactics. Importance of personal speed in attack: * Ability to exploit and open up small gaps in defence. * An attacker running at speed is more difficult to tackle than a slower moving target. * A high level of speed allows closer support for the ball carrier which gives him more options and can allow more dynamic, aggressive tactics to be used. * When the ball is kicked, a faster player may get to it before the opposition. This allows a much more expansive game to be played. * A quick player is able to get to break downs and tackle situations quicker, therefore able to retain more possession and keep the game flowing. Importance of personal speed in defence: * Makes the defender more likely to catch attackers who break through the first line of defence. * A fast defender can pressurise the opposition and limit the time and space they have to play in. * Again, kicks can be got to faster which gives more security in depth. * A fast defender who has turned over possession is able to turn defensive situations into attacking ones by exploiting the positioning of the opposition and by quickly counter-attacking. ...read more.

* Skipping. Using a rope to skip quickly again helps to improve the rate at which feet are picked up from the ground as well as improving coordination and leg strength. It is also possible to use plyometric exercises to improve power. These drills involve the fast contraction of muscles to produce a large force. The most common form is bounding over steps. The only problem with this type of exercise is the possibility of inducing muscular damage as a result of the stretch reflex. The initial testing session was done on the I achieved these results: Trial 1 (secs) Trial 2 (secs) Trial 3 (secs) Mean (secs) 30m Sprint rolling start 4.32 4.14 4.16 4.207 20m Sprint stationary start 3.67 3.73 3.63 3.677 I decided that a suitable goal would be to aim for an improvement of 0.4 secs for the 30m sprint and 0.2 secs for the 20m sprint. This is achievable, realistic and would give me a significant improvement to my rugby performance. Planning I needed to consider the volume of exercise already being undertaken when I planned my programme. Existing fitness sessions had to take precedence as in many cases I found that the commitment that I had already made was more important. So here Is a weekly schedule of my existing commitments. Monday School practice usually set-piece based or fitness orientated. Wednesday School training / match. Thursday Caernarfon youth training Saturday Match By looking at these prior commitments it is obvious that the most suitable days for heavy training are Tuesday and Thursday. Friday and Sunday are free but I would prefer not to have challenging work-outs on these days as they would interfere with preparation for and recovery from Rugby matches. ...read more.

I do not have a problem with self-motivation so I found that these sessions were highly beneficial, however, during the last 3 weeks of the training routine I had a lot of other commitments that meant I had to miss several sessions. I am sure that this will have affected my overall improvement. Towards the beginning of the sprinting sessions I found that after most sessions and during rugby practices I was experiencing pain in my right knee. This is most likely due to the repeated, extreme stress being put on that joint through the repetition of high intensity sprints. Since the cessation of such training sessions the pain has subsided. This could point towards either an inherent weakness in the structure of the joint or a technical defect in my running style. The programme was more successful in improving my acceleration than my straight-line speed as the time improvement for the 20m sprint was proportionately greater than that for the 30m rolling start sprint. I think that this was due to the short-distance basis of the majority of my sprinting. If I had increased the distance of each sprint and decreased the number of repetitions then I may have seen a greater improvement in the 30m time. However the focus of speed for the game of rugby is more often than not the ability to repeatedly accelerate to a high speed. The importance of covering the first 10 metres faster than the opposition is constantly referred to by commentators and coaches, yet pitch-length sprint races are rare for every rugby player bar wingers. Therefore in light of the requirements of the game and specifically the requirements of my position (as outlined in my introduction), my training programme has been highly successful in improving my potential performance. Andrew Thurston 27/04/07 ...read more.