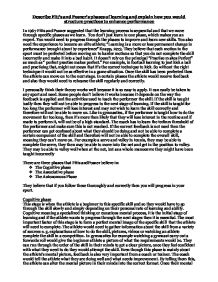 Describe Fitt's and Posner's phases of learning and explain how you would structure practices to enhance performance In 1967 Fitts and Posner suggested that the learning process is sequential and that we move through specific phases as we learn. You don't just learn in one phase, which makes you an expert. You would need to progress through the phases to improve and learn new skills. You also need the experience to become an elite athlete; "Learning is a more or less permanent change in performance brought about by experience" Knapp, 1973. They believe that each motion in the sport must be perfected before moving on to harder motions so that you do not complete the skill incorrectly and make it into a bad habit. It doesn't rely on the principal "Practise makes Perfect" as much as " perfect practise makes perfect." For example, in football learning to just kick a ball and practising that, might not mean that it's the correct technique to kick. So without the right technique it would not be as effective in a game situation. Once the skill has been perfected then the athlete can move on to the next stage. In certain phases the athlete would receive feedback and also they would need to rehearse the skill regularly and correctly. ...read more.

By telling them this, the athlete can alter the mental picture in their minds into the correct format. Once their mental image is correct they will perform the skill well and will be able to progress onto the next stage. Simpler skills would take less time to perfect, as they would not be as detailed. Visual guidance is key in this phase, as you watch what somebody is doing you tend to try and copy them e. g. In a 100m sprint when you are at the start line and the athlete next to you bends down to do a track start you might follow their example to give you an advantage. Associative phase This is the second part of Fitts and Posners learning phases. During this stage the learner will practise the skill, according to the information that they gathered during the cognitive stage. During this stage the performer will become more aware of their mistakes and they will also make a great improvement. Fewer errors are made in this stage and the performer is ready to learn harder and more complex techniques and is able to perform some efficient movements. Also, the motor programme develops and so does anticipation of the performer and the performer learns to monitor their own feedback. ...read more.

By going over the same thing lots of times will get the right mental image in their head. Structure practices - associative phase * During training sessions the coach would make the athlete do lots of diving drills. * The coach would tell the athlete what they are doing wrong and what they are good at, so that they can improve on the weak points. * Again they would watch the more advanced swimmer and also look at the research that they gathered in the cognitive stage. * Verbal guidance is very important though, so that they know what they are doing wrong so they don't get into bad habits. * They would repeat the skill over and over so that they get into the habit of doing the correct motion of that skill. * If the athlete is not progressing and is still performing the skill incorrectly then they may have to move back to the cognitive phase. Structure practices - autonomous phase * As the athlete has now perfected the skill they will put it into practice in a competition. * Also because they can complete the skill without thinking about it they will be able to focus on tactical ways to improve their skill, e. g. a shallow racing dive with a streamlined position. * You will make it a racing situation in the training session so that they can make it competitive. * You would also do take - overs ...read more.