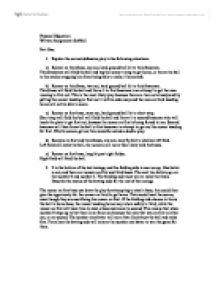 He would then field the bunt and throw to second and get the runner coming from first out forced. The ball is thrown to second because they want to get the man closest to home base out first. PART TWO Section Three: Applied Exercise Physiology a) Identify three major components of fitness required for successful performance in softball. Explain why each is important. Anaerobic Fitness This type of fitness where energy is supplied to the muscles depends heavily on the lactic acid system, to put body parts into motion quickly and sustain high intensity efforts for short periods of time. In softball this component of fitness is important because batsman must move quickly between bases and fielders must move quickly to field the ball. Muscular Endurance Muscular Endurance is the ability to work a group of muscles for long periods of time using sub maximal effort. It is important to have Muscular Endurance in softball to repeatedly throw the softball in the field, pitch if you're the pitcher and swing the bat every time you try to hit the ball when you step up to bat. Agility Good agility is the ability to change the position of the body quickly and precisely. ...read more.

Perfect for softball! Improving Agility There is no specific way to improve agility however there are a number of training methods where ones agility may improve through repetition and correct method. Any Callisthenic exercise that involves the whole body will improve agility. Circuit training which consists of a series of exercises arranged in order and designed to develop general body fitness or specific sport related fitness and skill will help to improve an athlete's agility. An athlete may improve his or her agility through agility sprints. These are short shuttle runs, or obstacle course were the athlete runs around a series of cones or makers. c) How would the principles of training be incorporated into these training methods to ensure improved performance in softball? Training methods should be incorporated so that you train specific muscles and energy systems that are specific to your sport. eg. In Isokinetic Weight Training, when you are training muscles such as shoulders, chest, biceps, triceps that all improve strength and power for batting and throwing in soft ball. Leg muscles can be trained using weights to increase anaerobic power. Fitness is specific to the type of exercise being performed, for instance; weight training develops anaerobic capacity. Specific exercise with the correct produce will cause a biological response of the body. The fibre size in the muscles will increase. ...read more.