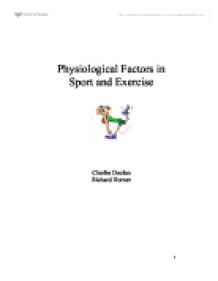 Physiological Factors in Sport and Exercise.

Physiological Factors in Sport and Exercise Charlie Doolan Richard Horner Thermoregulation The Effects of Thermoregulation in the Heat: There are many different things you have to contend with during sports and that are the heat and humidity, when training in these conditions they will affect the person in many different ways. The first and most noticeable would be the amount off sweat that is being produced, which can cause dehydration, the person will also feel more tired then they would usually in there normal conditions to exercising in a hotter climate. The affects of the heat are: 1. Heat and dehydration can be an athlete's worst problem. 2. Heat exposure and dehydration decreases performance and their negative effects are more. 3. Acclimatization will reduce the negative impact of heat on athletic performance. 4. The major physiological adjustments to heat acclimatization take about 7-14 days. 5. Training volume and intensity should be reduced on first exposure to the heat and gradually increase the intensity of training and then it should be maintained the acclimatization period. 6. Monitoring responses of individual athletes is essential, individuals respond differently to the heat 7. Records of body mass, urine output and colour, and subjected symptoms should be kept throughout the acclimatization period. 8. Acclimatization increases the athlete's need for fluid to match the increase in sweat rate. From a physiological standpoint, the most severe stress an athlete can encounter is exercising in the heat. ...read more.

Maximal cardiac output is not usually affected by altitude. 3. Although acclimatization to or residence at high altitude is required for optimal endurance performance at high altitude, the value of high altitude training for endurance performance at sea level has yet to be proven. 4. Nutrition for athletes at altitude can be a major problem, and weight loss will be significant at moderate to high altitudes. The amount of weight loss is generally dependent on the absolute altitude. Higher altitudes have dramatic effects on sport performance. At the 1968 Mexico City Olympics (altitude = 2,300 m) the decreased air resistance contributed to improved sprinting and jumping performances; Bob Beamon's Mexico City long jump record stood for nearly a quarter of a century, and is the classic example. The decreased air resistance at Mexico City undoubtedly helped Australian Ralph Dobell to set an Olympic record in the 800 m run. However, at longer race distances, performances were progressively worse in Mexico City than at lower altitudes. An additional observation in Mexico City was that in the endurance races most of the top performers had lived most of their lives at high altitudes or they had trained for long periods at high altitude. The defeat of Jim Ryun, the favorite and world record holder in the 1,500 m by Kip Keno of Kenya and the defeat of Ron Clark, the world record holder in the 5,000 m and 10,000 m, again by high altitude residents, were clear examples of the importance of living and training at high altitude. ...read more.

During hard exercise, carbohydrate can be depleted at a rate of 3-4 grams per minute. If this is sustained for 2 hours or more, a very large fraction of the total body carbohydrate stores will be exhausted and if not checked will result in reduced performance. Recovery of the muscle and liver glycogen stores after exercise will normally require 24-48 hours for complete recovery. During exercise there is in an increased uptake of blood glucose by the muscles and to prevent blood glucose levels falling the liver produces glucose from the liver stores and lactate. Consuming carbohydrate before, during and after exercise will help prevent blood glucose levels falling too low and also help maintain the body's glycogen stores. Many athletes cannot consume food before or during exercise and therefore a formulated drink that will provide carbohydrate is required. Fluid absorption There are two main factors that affect the speed at which fluid from a drink gets into the body: * the speed at which it is emptied from the stomach * the rate at which it is absorbed through the walls of the small intestine The higher the carbohydrate levels in a drink the slower the rate of stomach emptying. Isotonic drinks with a carbohydrate level of between 6 and 8% are emptied from the stomach at a rate similar to water. Electrolytes, especially sodium and potassium, in a drink will reduce urine output, enable the fluid to empty quickly from the stomach, promote absorption from the intestine and encourage fluid retention. 1 ...read more.