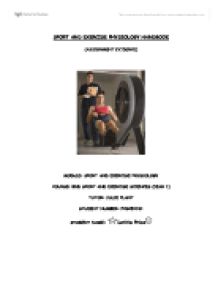 SPORT AND EXERCISE PHYSIOLOGY HANDBOOK (ASSIGNMENT EVIDENCE) MODULE: SPORT AND EXERCISE PHYSIOLOGY COURSE: BND SPORT AND EXERCISE SCIENCES (YEAR 1) TUTOR: JULIE PLANT STUDENT NUMBER: FCS251761 STUDENT NAME: Letitia Price THE INITIAL RESPONSES OF THE BODY TO EXERCISE 1. DESCRIBE THE INITIAL CARDIOVASCULAR RESPONSES TO EXERCISE The initial responses to exercise are: * The heart rate increases. * Anticipatory heart rise occurs. * Increase in carbon dioxide in the body. * Increase of lactic acid in the body. * Body temperature increases. * Stroke volume increases. 2. EXPLAIN THESE CARDIOVASCULAR RESPONSES, SUGGESTING WHY THEY OCCUR The cardiovascular system increases the rate of the heart to provide the muscles adequate amounts of nutrients and oxygen, as without these two components they could not function, the heart rate is the amount of time the heart beats or contracts to produce blood flow. Also the increased heart rate increases the removal of waste products because the blood pressure has been increased; the blood pressure is the speed of which blood is passing through vessels. Before any activity your anticipatory rise increases because when your brain thinks about exercising it stimulates the sympathetic nervous system which releases adrenalin, average persons anticipatory heart rate would be 10-15 more heart beats than their resting heart rate. The increase of carbon dioxide and lactic acid is because as we inhale more oxygen we are also producing more carbon dioxide therefore there will be more carbon dioxide levels in our blood stream. The increase of lactic acid is because during the first 10 seconds of an activity our bodies cannot adapt quickly enough to use oxygen to provide enough energy; therefore our bloodstream provides lactic acid into the muscles however this can cause serious fatigue. The increase of carbon dioxide and lactic acid is detected by cells called chemoreceptor's these detect changes in chemical environment, therefore this can inform the brain so it can transfer a message to the body to adapt accordingly. ...read more.

This essentially means that because the muscles elasticity is increased its ability to stretch further without tearing is also increased, for an example initially when you take blue-tak it is cold and when you stretch it the elasticity is stiff and brittle and breaks quickly, eventually when the blue-tak is handled with frequently it begins to generate more heat with the friction, therefore when stretched its elasticity will increase and it would be much more durable. As the muscles blood pressure is increasing this causes rapid heat due to the speed at which the blood is flowing through, this increase in heat has a knock on effect to the nervous impulses that are being sent and received by the muscles. Heat generates more speed within the nervous impulses thus increases the signal speed this is because the heat generates more energy for the ions and increases there rate at which the receive signal therefore the overall affect is that the speed of transmissions are increased. 25. USING GRAPHS, TABLES, EXAMPLES, RESEARCH AND PRACTICAL EXPERIENCES TO SUPPORT YOUR ANSWER, ANALYSE THE NEUROMUSCULAR RESPONSES TO STEADY-STATE EXERCISE Throughout the neuromuscular system the nerves connect with muscles during the neuromuscular junction, it is here where the ends of the nerves fiber connect to specific areas of the muscles membrane known as Motor end plates. Within these plates they consist of receptors which allow the muscle to respond to Acetylcholine this is the neurotransmitter. When the nerve stimulates the muscle at this junction an electrical pulse is transmitted which results in the muscle contracting. To allow an individual t carry out effective steady state exercise these junctions have to be efficiently working, however there are disorders which causes the neuromuscular system to malfunction these are a list of them: * Myasthenia Gravis * Botulism * Eaton Lambert syndrome * High doses of some antibiotics * Specific insecticides * Curare (an extract from plants formerly placed on the tip of some poison darts and used to paralyze and kill) ...read more.

any joints obtaining any injuries, the ligaments also have an increased pliability allowing the bones a wider range of movement to prevent any joint strains, however this can have an adverse affect because these ligaments may become vulnerable to tears. 47. USING GRAPHS, TABLES, EXAMPLES AND PRACTICAL EXPERIENCES TO SUPPORT YOUR ANSWER, ANALYSE THE SKELETAL ADAPTATIONS TO CHRONIC EXERCISE The long-term adaptations to the ligament and tendon strength during exercise increase significantly, when an individual undergoes intense strength training, the ligaments and tendons do not have the opportunity to adapt, this is because as the muscle mass increases, this applies further excess force and pressure throughout the muscle joints, the ligaments and tendons consist of fibrous protein collagen, they attach themselves onto the articulating bones, so as an individual undergoes continuous exercise this applies excess force throughout the ligaments and tendons, but as they try to adapt by increasing their diameter across the cross section, this increases their durability, however research suggests as the ligaments and tendons become more durable and allow more movement throughout the joints it is likely injuries are likely to occur as they allow so much movement that the joint can vigorously twist out of position and cause severe joint strains. I am someone who went throughout a season continuously training at least 6 times a week for at least 9 months as beneficial this was upon my fitness levels and muscular system it did not allow my ligaments and tendons any rest, this was evident when I tore my Anterior cruciate ligament, it was a complete tear suggesting that the ligament became so over trained that the fibres within the ligament became deteriorated because they never had chance for the protein molecules to amend. A knee specialist suggested that due to over training continuously my skeletal system adapted by attempting to strengthen the pliability of my ligaments, this then caused me more problem because as the flexibility of the ligament increased it increased the likelihood of it tearing completely. ...read more.