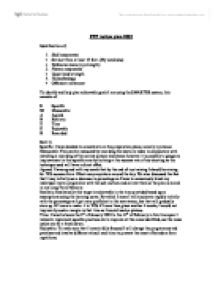 PPP Action plan 2003 Identification of; 1. Skill components * Set shot from at least 15 foot. (My weakness) * Defensive steals (my strength) 2. Fitness component; * Upper body strength 3. Tactic/Strategy * Offensive movement To identify and help plan achievable goals I am using the SMARTER system, this consists of. S Specific M Measurable A Agreed R Realistic T Time E Enjoyable R Recorded Skill 1) Specific: I have decided to concentrate on the preparation phase, namely my stance. Measurable: This can be measured by recording the shots on video in conjunction with watching a recording of the correct posture and stance however it is possible to gauge an improvement in this specific area by looking at the success rate of my shooting as the technique used will have a direct effect. Agreed: I have agreed with my coach that by the end of my training I should be aiming for 70% success from 15feet away anywhere around the key. We also discussed the fact that I may initially see a decrease in percentage as I have to consciously break my individual motor programme with the sub routines and correct them so the plan is stored in my Long Term Memory. Realistic: Realistically this target is achievable in the time provided based upon assumptions using the learning curve. By which I mean I will accelerate rapidly initially with the percentage as I get more proficient in the new stance, but that will gradually slow up. If I were to make it to 70% if I were then given another 6 weeks, I would not improve by such a margin in that time as I would reach a plateau. Time: I have between the 3rd of January 2003 to the 14th of February in this time span I intend to implement specific practises etc to improve all the areas identified, see the meso cycles etc for a break down. ...read more.

12/01S Watched the video which contained specifics on how to push the ball in front. Creatine taken, Well deserved rest. Watched the first training video, very useful, they introduced an idea to me about visualizing exactly what you should or are doing on a creative spontaneous 13/01M Decided to work on skill 2 today. Luckily I have a quite road in which to practice; I practised for the morning pushing the ball out in front of me and chasing after it, seem to be finding this difficult because I'm still trying to find my limits of how far to push it out and still reach it Forgot to take Creatine. Didn't have time to do weights. Attended boxercise 14/01T Creatine taken. Made a concerted effort to try exceptionally hard again on my lower body, completed all the exercises, upped the weight of squat bar to 85 kg, certainly felt the difference but completed 3 sets of 6. I backed off on the lunges and did them with no weight at all. I visually and physically mapped out the set team offences and drew out a diagram of the court and mapped out ideas of positions etc that I could get myself in to. 15/01W Also ran by a few of the shooting drills, coach noticed an improvement in my stance. At training, we began work on the "Lakers drill" everyone found they could complete the task in 5 bounces, cutting it down, increased the error % hugely and the success rate of baskets being scored was exceptionally low. Creatine taken, backs hurting slightly today, due to incorrect dead lift posture, I decide against working my back and stick to barbell curls, 35Kg 3 sets of 7 and shoulder shrugs, finding those easier this week, also worked on abs by doing several crunches etc. Found a new technique for bicep curling, to be done over a medicine ball single handily, known as a preachers curl, see later details. ...read more.

Aided by the training sessions that I was doing, ie. Plentiful, short sessions, well suited to learning discrete tasks such as the jump shot. At the associative stage, coach continually demonstrated and set me up in a structured environment. Finally towards the end of the training the movement went back to being autonomous but performed technically better than before. I also believe the mental rehearsing I continually practised aided me, because it allowed me to cognitively think about the Kin aesthesis of the movements and desired outcome. I also believe the success or rate of, was partially to do with me. I have been performing and playing sports all of my life and I tend to be proficient at any sport I play, because I have natural abilities such as balance, co-ordination and explosive strength. Thus I believe I had positive transfer throughout my learning. As well as being exceptionally determined, both intrinsically and extrinsically. Strength wise I believe the success was due to the motivation of myself to continually train and be committed to my goals, but also with the added intake of protein and amino acids provided by the Creatine. Improvements either made or for the future As discussed earlier I made one or two changes for example the way I recorded the tactic. However I found the exercises and drills to all be of great benefit and found no need to change them. In the future, I would try and change the environment upon which I worked in, and continue to train in this manner. I found the breaking down of what needs to be done via the mesocycles etc very beneficial, as it kept me on target. The training is not over I have my long term goal set as the Crystal palace hoop fest and I intend to go there being able to bench press 120Kg , run the court in 3 bounces, score 70% in a game shot wise and be spatially aware. ...read more.