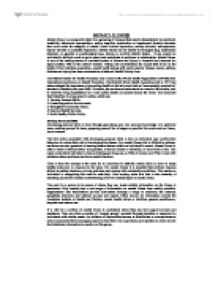 relevence of &quot;mental illness&quot; to the 5 action areas of the Ottawa charter

MENATL ILLNESS Mental illness is a nonspecific label for a grouping of illnesses that may be characterised by emotional instability, behavioral dysregulation, and/or cognitive dysfunction or impairment. Specific disorders that come under the category of mental illness include depression, anxiety disorder, schizophrenia, bipolar disorder or postnatal depression. Mental illness can be caused by biological (e.g. anatomical, chemical, or genetic) or psychological (e.g. trauma or conflict related) factors. It can impact an individual's ability to work or go to school and contributes to problems in relationships. Mental illness is one of the leading causes of non-fatal burden of disease and injury in Australia and accounts for approximately 13% of the nation's disease. Taking into consideration the impact that it has on the health of the Australian population, mental health (along with cardiovascular disease, cancer, asthma, diabetes and injury) has been nominated as a National Health Priority Area. The Ottawa Charter for Health Promotion was a result of the World Health Organisation's (WHO) first international conference on Health Promotion. The thirtieth World Health Assembly, held in 1977 had acknowledged the importance of promoting health so that all people had an "economically productive" standard of health by the year 2000. Therefore, the conference came about as a result of this notion, and to meet the rising expectations for a new public health movement around the world. ...read more.

School-Link will provide a framework for programs to improve the understanding, recognition, treatment, support and prevention of depression and related disorders in adolescents, particularly those attending State secondary schools. In recent years, the environment has been modified in some ways to accommodate and reduce the incidence of mental illness. Increased awareness of emotional or social trauma as a cause of mental illness have influenced and helped to reduce the stigma often related to mental illness. Acknowledging the occurrence of domestic abuse and reduced disapproval of divorce have resulted in the community being better able to facilitate and assist those affected by these two occasions. The creation of supportive environments is important because many environmental factors (socio-cultural, physical, political, and economic) have the power to impact on mental illness. Socio-cultural factors for mental illness in Australia include a family history of mental disorders, stressful environments and indigenous males. The physical may be a chronic illness or substance dependence. Political factors are important, it has been shown that there is higher incidence of mental illness in areas that are involved in civil or military actions or that have recently suffered a major natural or man-made disaster. Economic factors also stand to have impact on mental health, with people of a lower socio-economic status are disadvantaged in terms of having reduced access to facilities and services due to a financial barrier. ...read more.

The purpose of this principle is to guide public policy so that it provides an environment in which healthier choices are easier. The first public policy to address mental health was in 1998 when it was identified as National Health Priority Area. Then in 2000 the Commonwealth Government funded a National Initiative to promote awareness of mental illness through community education about the disease as a whole, and looking at each facet, depression, anxiety, bipolar disorder, schizophrenia and postnatal depression. Another initiative has been to increase the standards of professional training for mental illness. This has been facilitated through the Better Outcomes in Mental Health Care program, which gives doctors a level one or two accreditation in the practice of treating mental health. Other public policy initiatives include laws designating working hour limits, with the goal of reducing work-related stress and government organisations such as "Job Smart" that helps to reduce depression that results from unemployment. The action areas of the Ottawa Charter are imperative when addressing priority areas for Australia's health. This is because health is a multi-dimensional concept, and as such, to address a personal health services need to asses all aspects of that person and all aspects that contribute to their health, be it their physical, emotional, mental, social, or spiritual health. Therefore, health promotion requires a vast range of initiative that cater to all the various facets of health. ...read more.