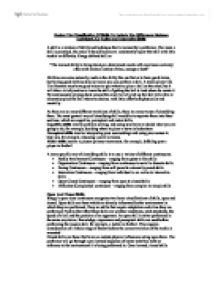 Review The Classification Of Skills To Include The Differences Between Individual, Co-Active and Interactive Skills.

Review The Classification Of Skills To Include The Differences Between Individual, Co-Active and Interactive Skills A skill is a mixture of ability and technique that is learned by a performer. The more a skill is practised, the easier it should become to consistently repeat that skill with little trouble or difficulty. Knapp defined skill as: "The learned ability to bring about pre-determined results with maximum certainty often with minimal outlay of time, energy or both" Abilities can come naturally, such as the ability the run fast or to have good vision, but having good abilities does not mean you can perform a skill. A tennis player like Tim Henman may have good vision to spot where to place a ball on the court, but it will take a lot of practice to learn the skill of getting the ball to land where he wants it. By continuously playing shots around the court, he will pick up the skill to be able to accurately place the ball where he desires, with little effort both physically and mentally. As there are so many different variations of skills, there are many ways of classifying them. ...read more.

The performer will go through a pre-learned sequence of motor activities with no reference to the environment it is being performed in. Once learned, closed skills should be performed in exactly the same way each time. A good example of this is darts, aiming for a specific number. There are no outside physical factors that interfere with the performance. The board remains stationary, and the environment remains the same. Self Paced and Externally Paced Skills The pacing continuum recognises two extremes of skill, with other skills fitting in between the two extremes. A self-paced skill is where the performer controls the rate at which the action takes place. This can mean taking as much, or as little time as they want. An example of this is a set shot in basketball. It can be taken as and when the player wants to. An externally paced skill is where the timing of the action is not controlled by the performer, but by an outside instigator. This could be an official or another performer. In tennis, the receiver of a serve will have to use externally paced skill to return the ball, as it is his opponent who chooses where and when the ball is hit. ...read more.

This is an individual skill. Co-active skills are those performed at the same time as others but without direct confrontation. In a 400metre race, competitors will run against each other, but will not be able to physically influence someone else's performance, as they are in separate lanes. Interactive skills are those in which other performers are directly involved. There is a direct influence on skilful performance, created from the opposition. The greater the level of interaction is, the greater the potential is for the opponents to affect each others games. Football is a good example for this, as depending on how good a player is at tackling or dribbling, there can be various consequences, influencing mistakes either way. The different skills I have listed in this essay, are usually involved in continuums devised by Barbera Knapp. Depending on the sport, there are different requirements to the skills that are needed. By identifying the requirements, skills can be more easily developed. Most skills are often closely linked to one-another. Closed skills and individual skills are very closely linked, as there is no outside physical factors affecting either. Each sport is either played individually, co-actively or interactively, and they all require different forms of skill to give a perfect performance. ...read more.