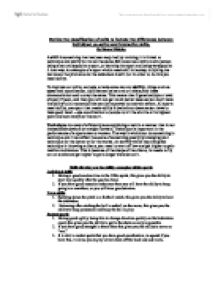 A skill is something that has been acquired by training; it is linked to technique and ability but is not the same. Skills can be a mixture of a person being a naturally good at a sport, or learning the sport and being very good at it that way. An example of a sport which needs skill is hockey, dribbling the ball down the pitch around the defenders is skill but in order to do this you need ability.

To improve our skills, we have to have some natural ability, things such as speed and coordination. Abilities can be natural or innate; and these characteristics tend to stay the same. This means that if genetically your level of sport if poor, and then you will not get much better because you don’t have the ability to but some abilities can be improved to a certain extent. All sports need ability, one sport that needs ability is badminton because you have to have good hand – eye coordination to be able to hit the shuttle at its highest point and accurately on the court.

Technique is a way of efficiently accomplishing a task in a manner that is not immediately obvious or straight forward. Technique is important in the performance of a sportsman or woman. The way in which you do something is technique and it can affect the score of something greatly by changing your technique for the better or for the worse. An activity which requires great technique is throwing a discus, you need to start off low and get higher to gain maximum distance. This is because of the shape of the discus, its needs to fly out on a side and get higher to get a longer distance on it.

Skill allowing you the ability examples within sports

Skills on the profile:

Continuous- Cycling. This is continuous as there is no clear end or beginning in the exercise and it is something which is over and over again.

Serial Skills are a group of discrete skills strung together to make a new and complex movement. i.e. the sequence of skills for the triple jump.

Discrete- Cricket- bowling. This is more towards discrete as there is a clear beginning and end and to start again you must go to the beginning. It’s also up to you how much pace or swing you put on the ball which the batters does not know how much or each you are going to put on it.

Self paced- Javelin. This is a self paced skill as the athlete controls the rate of performance and the athlete decides when to initiate movement.

Externally paced- Football- goalkeeper saving a shot. This is an externally paced skill as the environment can control the rate of performing the skill, as the performer must pay attention to the external events in order to control there rate of movement. These skills usually involve good reaction.

Simple- Badminton-clear. This is a simple skill as it is very straight forward with very few subsections to go through to perform the skill. Requires decisions.

Complex- Rugby-tackling. This is a complex skill as this involves a large attention span as they are complicated and are practiced in training over and over to make it easier to perform in competition.

Low organisation- Badminton- serve. This is a low organisation skill as it is very easy with uncomplicated moves; this can also be broken down and practiced in sections.

High organisation- Tennis- volley. This is a high organisation skill is it has a complex amount of skill involved and cannot be broken down to practice separately.

These skills are those which are directly influenced by the environment in which they are performed.  They are skills that require adaptation every time they are performed. The adaptation may depend on a range of environmental conditions such as the weather, pitch conditions, speed of the ball, and pitch conditions.  This means an open skill is never performed in exactly the same way twice. We must use our knowledge, experience and perceptual skills to analyse the situation before performing the required skill.

Closed skills are those that have no outside physical influences acting upon them. They are the same each time they are performed. The performer will go through ‘a pre-learned sequence of motor activities’ with no reference to the environment in which the skill is performed. Once learnt a closed skills should be performed in exactly the same way each time.

Individual skills are skills that are performed without any reference to another player. These skills tend to be closed and self paced, they can also be discrete, serial or continuous. Can be either gross or fine muscular involvement. For example javelin.

Co-active skills are skills where others are involved in the same activity, can be competitive or working as a team. These skills are not completely open or closed however they tend to be externally paced, can also be discrete, serial or continuous. Can be either gross or fine muscular involvement. For example a goalkeeper saving a shot in football.

Interactive skills are skills that are dependant on interaction with the environment. These skills are mainly open skills and are externally paced, can also be discrete, serial or continuous, but can either be gross or fine muscular involvement. For example returning a serve on a grass court in tennis.