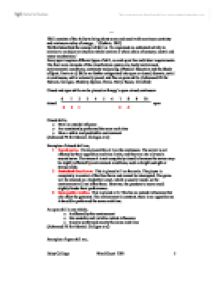 Review the classification of skills to include the differences between individual, co active and interactive skills.

Review the classification of skills to include the differences between individual, co active and interactive skills 'Skill consists of the ability to bring about some end result with maximum certainty and minimum outlay of energy...' (Guthrie, 1952) Welford described the concept of skill as 'An organised co-ordinated activity in relation to an object or situation which involves a whole chain of sensory, central and motor mechanisms.' Every sport requires different types of skill, as each sport has individual requirements. The four main elements of the classification system are; body involvement, environmental conditions, continuity and pacing. (Physical Education and the Study of Sport. Davis et al) Skills are further categorised into open or closed, discrete, serial or continuous, self or externally paced, and fine or gross skills. (Advanced PE for Edexcel; Galligan, Maskery, Spence, Howe, Barry, Ruson, Crawford) Closed and open skills can be placed on Knapp's open-closed continuum 0 1 2 3 4 5 6 7 8 9 10 closed open 3 2 1 5 4 Closed skills; o Have no outside influence o Are consistently performed the same each time o Have a stable and predictable environment (Advanced PE for Edexcel. Galligan et al) Examples of closed skill are; 1 Tennis serve. ...read more.

Such as; 3 A javelin throw. This individual sport is at 5 on the continuum. It has the discrete skill of the actual throw, and the continuous skill of running. With these to skills combined it is a serial skill. 4 Running forehand in tennis. This is positioned at 5 because it is also a mixture of discrete and continuous. The running to receive the ball is a continuous skill, whereas hitting the ball is a discrete skill. Finally, continuous skills are those; o That have no obvious start or finish o The end of one cycle is the beginning of the next o That include repetition of the same skill or movement (Advanced PE for Edexcel. Galligan et al) Examples of continuous skills are; 5 Running. This is at 10 because it is entirely continuous. There is not one skill in running that can be taken out and perfected, the skill just flows from element to element. 6 Football dribble. This is placed at 8. The running part means it is a continuous skill, whereas kicking the ball is a discrete skill. With the skills combined it has no clear beginning and end so it is therefore continuous. Self and externally paced are measures of whether the performer has control over the timing of the skill. ...read more.

Examples of these are team sports, such as football, where a tackle is a direct confrontation. (Advanced PE for Edexcel. Galligan et al) Many of the skills mentioned earlier have direct links with each other. Some connections are that most individual skills tend to be closed skills and are also often associated with motor and gross skills because they involve muscular systems and concern movement. Interactive are usually open skills, because they take place in an unpredictable environment and have some form of opposition. Interactive skills also require perceptual skills, which are skills that require interpretation of stimuli. To demonstrate the fact that games involve several different skills, continuums can be linked and a profile of the skill requirements of the game can be formed. For example skipping around cones is a closed, continuous and self-paced skill, so its profile will look like this. 0 1 2 3 4 5 6 7 8 9 10 closed open x discrete continuous x self-paced externally paced x Classifying skill is a useful way of constructing a model to further our understanding of the way different skills are performed. The knowledge of the classification of skills will help to determine the teaching strategies used, and this in turn, will help to optimise performance. Few skills can be easily categorised so continuums are used to show to what degree the skill fits into the category. ...read more.