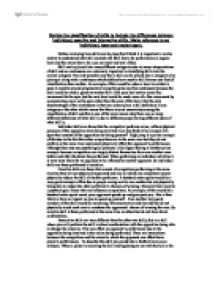 Review the classification of skills to include the differences between individual, coactive and interactive skills. Make reference to an individual, team and racket sport

Review the classification of skills to include the differences between individual, coactive and interactive skills. Make reference to an individual, team and racket sport. Before reviewing how skills can be classified I think it is important to realise and try to understand what skill consists off. Skill has to be performed on a regular basis and the action has to be a pre set result and not a fluke. Skill can be placed into many different categories due to many interpretations of skill and so continuums are extremely important in classifying skills into the correct category. The only possible way that a skill can be placed into a category is by placing it along with a continuum which defines how much a skill favours one find of classification than another. An example of this would be when a bowl in cricket is spun it could be placed progressively along the gross and fine continuum because the bowl could be made a gross movement for a little pace but involve some fine movement for the spin, but the next bowl could be made more of a fine movement by concentrating more on the spin rather than the pace of the bowl. ...read more.

So individual skills are those performed in isolation. Coactive skills are those that consist of competitors performing at the same time but they are not physically separated and also in which one competitor cannot physically reduce the skill of another performer. A hundred metre sprint would be a very good example of this due to people racing next to one another but not physically being able to reduce the other performer's chances of winning. However there may be a psychological factor that can influence competitors. An example of this would be a hundred metre sprint event, your opponent speeds up and goes past you , this is then likely to have an impact on you to speed up yourself. Also another very good example of this skill would be swimming. Swimmers swim side by side but do not physically touch each over to condense the opponents' chance of winning the race. So coactive skill is those performed at the same time as others but do not have direct confrontation. Interactive skills are very different than the other two skills; this is a skill where you will perform the skill in direct confrontation with the opposition being able to change the outcome. ...read more.