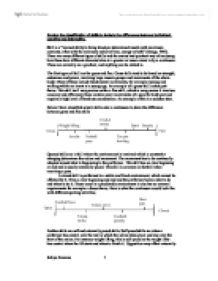 Skill is a “learned ability to bring about pre determined results with maximum certainty, often with the minimum outlay of time, energy or both” (Knapp, 1963). There are many different types of skills and the easiest and quickest way of analysing how these have different characteristics to a greater or lesser extent is by a continuum. These are normally on a gradient, and anything can be slotted in.

The first types of skill are the gross and fine. Gross skills tend to be based on strength, endurance and power, involving large muscle groups and movements of the whole body. Many of these include fundamental movements, for example running and walking which are learnt at a young age. An example of a gross skill is shot putt throw. This skill isn’t very precise unlike a fine skill, which is very precise it involves accuracy and efficiency; these contain small movements of a specific body part and requires a high level of hand-eye coordination. An example of this is a snooker shot.

Opened skills are a skill where the environment is involved which is constantly changing determines the action and movement. The movement has to be continually adapted around what is happening to the performer.  This skill has no clear beginning or end and is usually externally paced. This skill is common in football when receiving a pass.

A closed skill is performed in a stable and fixed environment, which cannot be affected by it. It has a clear beginning and end and the performer knows what to do and when to do it. These occur in a predictable environment it also has no external requirements for example a discus throw. Here is what the continuum would look like with different sporting activities;

Further skills are self and externally paced skills. Self paced skills are when a performer has control over the rate in which the action takes place and also over the start of the action. For instance weight lifting, this is self-paced as the weight lifter has control when the lift starts and when to finish it.  Opposition may affect externally paced skills. Timing and form are essential to these skills and are determined by what is happening in their surrounding environment, such as receiving a pass in tennis. The player needs to know and time his actions of the opposition in order to receive and return the serve. This skill is closely linked to open skills by which the performance is determined by the environment.

The final types of skill are serial, continuous and discrete.  A serial skill is when several different distant elements are joined together to form a new and complex integrated movement with several phases, e.g. triple jump is made up of hop, skip and jump. A continuous skill has no obvious beginnings or endings. It is skills or actions that run into each other to create a cycle of movement, which can be, repeated for example swimming, running and cycling.  They cannot be spilt into subroutines or easily distinguishable in parts. They last as long as the performer wishes who can stop during the performance at any time, making them self paced skills.         Discrete skills are brief and well defined. They have clear beginnings and endings and can be performed by themselves without linkage to other skills, for example a hammer throw in athletics.

Below is the continuum between discrete, serial and continuous skills. I have classified several skills to show the differences.

When looking at skills you need to know the interaction between the competitors and to what extent the opposition will have an effect on a player’s performance. There are three types of skill, individual, coactive and interactive.

Individual skills are performed alone and do not have the physical presence of an opposition performing at the same time. The opposition can stand at the sidelines and watch but cannot put any physical pressure on the competitor although there could be some psychological pressure. The competitor can distant themselves before and after the event. Individual skills tend to be more self paced and closed skill. An example of this is figure skating. This is because it is set in a set environment i.e. the ice rink; it has a clear beginning and ending. The performer has complete control over the rate of the action.

Coactive skills involves competitors performing at the same time but are physically separated so they cannot hinder others performances e.g. 100m sprinter cannot come out of their lane, there can be a psychological effect on performers for example a sprinter may performer better whilst running against those of similar ability as them. Coactive skills are more linked to open and externally paced skills this is because involves opposition, this means that the play is constantly changing around you.

Interactive skills are performances that can be controlled by the opposition. The performance is based on whether the opposition allow you to play to the best of you ability, more highly interactive games allow you to have a close proximity between the opposition and bodily contact is allowed, for instance a rugby tackle. The less bodily contact lowers the interactive skill, for example netball, where bodily contact is not allowed altogether. When the areas of play are separated such as tennis the less interactive the skill is again. This skill can be a combination of self and externally paced for the reason that the performer has control over the move for example a netballer has control over the rate and timing of which the ball is thrown. It is externally paced as timing and form are determined by the environment, the player need to know and time his actions of the other player to receive a pass.

To conclude this there are only a few differences between individual, coactive and interactive skills. There are slight links between individual and coactive, they have certain similarities such as they both could have psychological pressure from the opposition but are physically separated. There also are slight similarities between coactive and interactive as they both have opposition and that it depends on whether the oppositions’ performance lets you perform to the best of you ability. “Skills can be seen as partly individual, partly coactive and partly interactive” ( Honeybourne et al., 2004), showing that classifying a sport into a specific group is near enough impossible. However we can start to learn how to interpret them and as a result this enhances learning and gives an understanding of them.