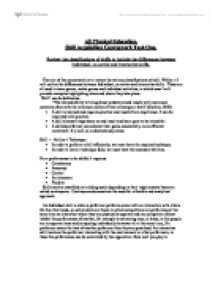 Review the classifications of skills to include the differences between individual, co-active and interactive skills.

AS Physical Education. Skill Acquisition Coursework Task One. Review the classifications of skills to include the differences between individual, co-active and interactive skills. The aim of this coursework is to review the various classifications of skill. Within it I will outline the differences between Individual, co-active and interactive skills. These are all used in team games, racket games and individual activities, in which case I will provide examples highlighting when and where they take place. 'Skill' can be defined as: "The learned ability to bring about predetermined results with maximum certainty often with the minimum outlay of time of energy or both" (Guthrie, 1956) * A skill is learned and requires practice and results from experience. It can be improved with practice. * A skill always brings about an end result and has a goal to be aimed for. * A skilled performer can achieve their goals consistently, in an efficient movement. It is well co-ordinated and precise. Skill = Ability + Technique. * In order to perform a skill efficiently, we must learn the required technique. * In order to learn a technique fully, we must have the necessary abilities. For a performance to be skilful it requires: * Consistency * Accuracy * Control * An intension * Fluidity Skills can be classified on a sliding scale depending on their requirements these are called continuums. Continuums demonstrate the need for a flexible and analytical approach. ...read more.

To do this an interaction continuum is used: Individual Skills Co-active Skills Interactive Skills * A somersault in gymnastics * A 100M sprint in athletics * Wrestling * The triple jump in athletics * A relay race in athletics * A doubles match in badminton * Serving in badminton * A free throw in basketball * Tackling in football Self-paced/Externally paced Skills. The Pacing continuum is concerned with the extent to which the performer has control over the timing of the action. Actions are either, 'self paced' of 'externally paced'. This is, who controls the timing of the skill, it may be the performer or an outside factor, such as a referee. Self-paced skills are those that are instigated by the performer. They can take as much time or as little time as they wish. An example of this would be a badminton serve, the performer is not told to take the serve at a particular time. It tends to be a closed skill because the performer is in control of most factors. Externally paced skills are those in which the timing of the performance is not controlled by the performer, but by an outside factor. This may be the weather, for example in sailing, or an official or it could be another performer, such as a service return in badminton. It tends to be an open skill because it is dependent on the surrounding environment. ...read more.

Gross skills involve large muscle groups and movement of the whole body; they have a margin of error in terms of accuracy. These are skills such as, walking, running, etc. Fine skills are those which involve small movements of specific body parts. In most cases, these need much control and a high level of accuracy. These are skills such as writing, darts or playing the piano. Coaches and players must consider the movements in between the two extremes, they must be analysed and practiced in order to improve. The continuum below shows the two extremes of gross and fine skills, with examples from each of an open and closed individual activity, a co-active sport and an interactive sport. Fine Skills Gross Skills Open Individual Closed Individual * Bowling in cricket * Putting a shot put Open Co-active * Throwing a line out ball in rugby Closed Co-active Open Interactive * Shooting in football Closed Interactive In conclusion, from the continuums above, I realize that continuums are very important in classifying skills correctly. A skill can be categorized by placing it along a continuum, this will help to break them down which again makes skills easier to learn or teach as it allows people to analysis each task. Once a skill is learnt it can then be transferred from one sport to another. A disadvantage to the continuums is that you cannot place a skill defiantly in one category or the other, which means that there may be some uncertainty among the classification of skill. This leads to people having different ideas about what skill is. ...read more.