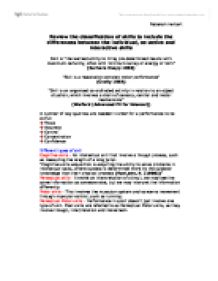 Review theclassification of skills to include the

Review the classification of skills to include the differences between the individual, co-active and interactive skills Skill is "the learned ability to bring pre-determined results with maximum certainty, often with minimum outlay or energy or both" (Barbara Knapp 1963) "Skill is a reasonably complex motor performance" (Cratty 1964) "Skill is an organised co-ordinated activity in relation to an object situation, which involves a chain of sensory, central and motor mechanisms" (Welford [Advanced PE for Edexcel]) A number of key qualities are needed in order for a performance to be skilful: Focus Accuracy Control Concentration Confidence Different types of skill Cognitive skills - An intellectual skill that involve a though process, such as measuring the length of a long jump. "Cognitive skills acquisition is acquiring the ability to solve problems in intellectual tasks, where success is determined more by the subjects' knowledge than their physical prowess (VanLehn, K. [1996])" Perceptual skills - Involve an interpretation of stimuli, we may see the same information as someone else, but we may interpret the information differently. ...read more.

Closed skill - A skill that has no physical outside influence, and is performed the same way every time. This is because the environment is stable. Such as, a handstand in gymnastics. Closed Open Gross v. Fine Gross skill - A skill that involves large muscle group movements, such as hitting a smash in tennis or running. Fine skill - A skill that involves small intricate muscle movements, such as shooting a rifle or throwing a line out in Rugby. Gross Fine Discrete v. Continuous v. Serial Discrete skill - This skill has a clear beginning and end and can be practiced on its own, such as throwing the ball up in a serve for tennis. Continuous skill - A skill that has no obvious start or finish, it flows from element to element, such as running. Serial skill - This is a skill that is made up of a number of discrete and continuous skills put together. They are skills that make up a routine or sequence, such as a floor routine in gymnastics. ...read more.

The only way that a skill can be placed in a category is by placing it along a continuum. Coaches and trainers can use continuums for a great advantage when devising training programmes for their target trainees. The continuums can place people on different parts due to their levels of skill, so not placing people out of their depth. For example, a learner who has just taken up football will need to be taught basic skills like passing and dribbling the ball, but an experienced, highly skilled footballer will need to be taught some more technical skills to add to their already skilled game. The disadvantage of the continuums is that a skill cannot be placed definitely in one category or the other which means that there is some uncertainty among the classification of skill, which is also why there are many different definitions of what skill is, because different people have different ideas about what skill is. ...read more.