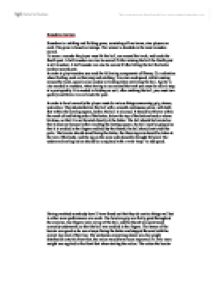 Rounders Analysis Rounders is a striking and fielding game, consisting of two teams, nine players on each. The game is based on innings. The winner is decided on the most rounders scored. To score a rounder the player must hit the ball, run around the track, and touch the fourth post. A half rounder can also be scored if after missing the ball the fourth post is still touched. A half rounder can also be scored if after hitting the ball the batter reaches second post. In order to play rounders you need the following components of fitness; Co-ordination when fielding, such as throwing and catching. You also need speed, whilst running around the track, speed is also needed in fielding when retrieving the ball. Agility is also needed in rounders, when having to run around the track you must be able to stop at a post quickly. It is needed in fielding as well, after catching the ball, you must turn quickly and throw it on or touch the post. In order to bowl correctly the player must do various things concerning grip, stance, and action. They should deliver the ball with a smooth continuous action, with both feet within the bowling square, before the ball is released. It should be thrown within the reach of and hitting side of the batter, below the top of the batters head or above his knee, so that it is not bowled directly at the batter. ...read more.

The player should also stand with feet comfortably apart with the weight balanced on the back foot. When performing the action of batting the player should watch the bowler's hand throughout the swing and until released. The player must then swing the bat with a fast circular action and should keep his arm parallel to the ground. He should ensure that he steps forward onto his front foot as the bat is swung through to hit the ball. The batter should also hit the ball as near to the centre of the bat as possible. Having observed somebody bat I have identified their strengths and weaknesses. Considering grip and stance the batter performed extremely well; he was always sideways on to the bowler and also turned his body as he hit the ball. His weight was on his back foot most of the time. The batter seemed to have a good grip on the bat, but could sometimes be to relaxed. However the bat was always held in the correct position, this showed good preparation as it was held back in a ready position. The batters action was also fairly competent as most of the time he watched the ball onto the bat and stepped on to his front foot as he hit the ball, showing good technique when transferring weight. The batter showed weakness when it came to the area of the bat the ball was hit with. ...read more.

I think hand-eye co-ordination plays an important role in where a bouts on the bat you hit the ball. In order to improve the batters co-ordination I will set up a throwing and catching exercise. I will pair up the class and they will have two balls per pair, they will throw the ball to their partner whilst also trying to catch the one thrown to them. They will repeat this exercise many times and should improve greatly. The batter and the bowler's performance could have been affected on the day by various things. One thing that would have affected performance could have been the weather. For example, if it was raining vision would have been impaired and grip on the ground would be reduced due to the slippery surface. The batter or bowler could have had some type of injury, which would have hindered performance. Mental well-being could have also played a part in how well somebody performed, if somebody was particularly depressed on the day it could have had an affect on the effort put into the activity. The kit that the person was wearing could also hinder performance as it may not have been suitable for the activity and may have stopped ease of movement. The person's energy levels would have had an affect on the performance of the batter or bowler; if energy levels were low then the person would have put minimal effort into the activity. ...read more.